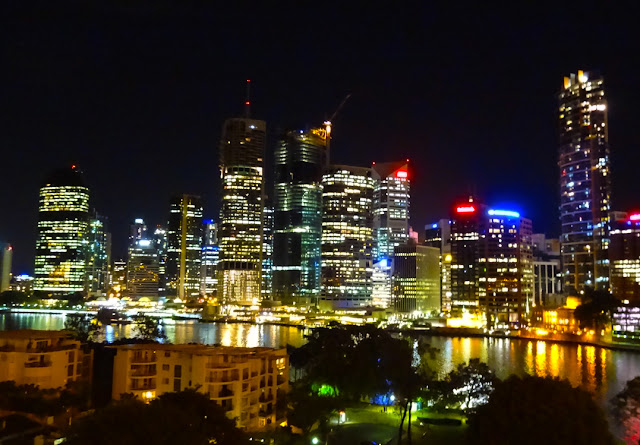 “Reverie is not a mind vacuum. It is rather the gift of an hour, which knows the plenitude of the soul.” - Gaston Bachelard

I am in Brisbane for work for a couple of days, attending a conference. I took the early flight up this morning, meaning that I had to get up at 3:30 a.m. so that I could have a leisurely start to the long day with a good, slow breakfast and then catch a taxi to the airport all in good time for my flight at 6:00 a.m. All went well and the flight was pleasant enough, although the Melbourne to Brisbane stretch is now about two-and-a-half hours with all the delays and holding patterns that one has to endure.

At least, it has been an interesting day with some good speakers, but especially so an excellent speaker in the face of Michael Pascoe (http://www.celebrityspeakers.com.au/economic-speakers/michael-pascoe/). I must admit that I have been a long-time fan of his as he has always been a good journalist and TV personality, giving incisive reports and commentary, as well as good financial and political analyses. He was an informative and entertaining speaker, making even the dull economical reportage interesting and engaging.

There was quite a great deal of networking at the conference and I caught up with many people I knew, as well as making some new contacts. There was a cocktail function in the evening, affording even more networking opportunities, but from what I could see from the other conference delegates some serious drinking opportunities also. A colleague and I stayed for a little while and then went off and had a pub dinner.

After coming back to the hotel for an early night, I suddenly felt the urge to go out for a walk. The air was warm and the night still and calm. I walked out and found my way to the Story Bridge. The river below was reflecting the lights of the City with boats and ferries still going up and down its length. After the hectic day it was relaxing to sit and watch the thousands of lights coruscating in the distance, their reflections scattered by the slow flowing water of the river. A thousand thoughts flitted in and out of my mind and the meditation of the sparkling lights seemed to have a calming, peace-giving effect.

My reverie was interrupted by a few fellow walkers, young men, who walked by noisily conversing, laughing and generally horsing around. I watched them walking on by and smiled, remembering my youth and similar excursions into the exciting nightlife of the big city. I felt sleepy then and came back to the hotel, thankful a little perhaps that I wasn’t a youth any more! Another early start tomorrow.

reverie |ˈrevərē| noun
A state of being pleasantly lost in one’s thoughts; a daydream: A knock on the door broke her reverie | I slipped into reverie.
• Music an instrumental piece suggesting a dreamy or musing state.
• archaic a fanciful or impractical idea or theory.
ORIGIN early 17th century: From obsolete French resverie, from Old French reverie ‘rejoicing, revelry,’ from rever ‘be delirious,’ of unknown ultimate origin.
Posted by Intelliblog at 01:54