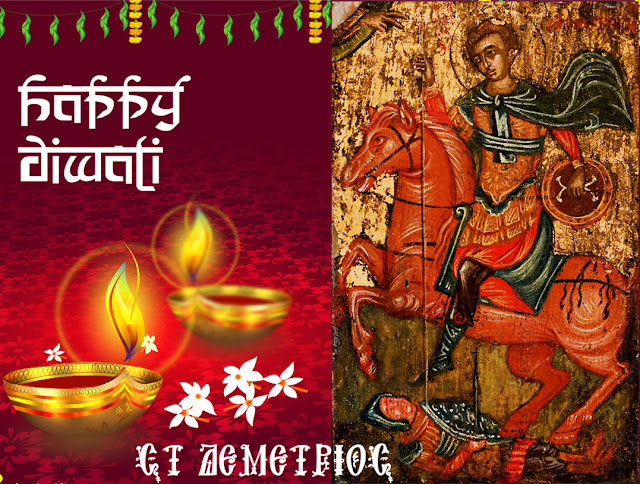 It is the night of the new moon tonight and Hindus in India and all over the world celebrate Diwali. Diwali (or Deepaawali) means “a row of lamps” (deep = lamp, vali = array). Of all the festivals celebrated in India, Diwali is one of the most loved and quite an important one. It is a joyous feast and its magical touch creates an atmosphere of well-being and merriment. It is a family festival celebrated 20 days after Dussehra (commemorating the triumph of Lord Rama over the demon Ravana), on the 13th day of the dark fortnight of the month of Ashwin (October / November). Diwali is a festival of lights symbolising the lifting of spiritual darkness and the victory of righteousness over evil. It celebrates the glory of light and commemorates Lord Rama’s return to his kingdom Ayodhya after completing his 14-year exile.

During Diwali, homes are decorated, traditional sweets are distributed by everyone and thousands of lamps are lit to create a world of fantasy and fairy tale beauty. The dark moonless night is overcome by the arrays of lamps that give hope and joy to everyone celebrating. Although Diwali is a time for fun and revelry, it is also a time for puja (devotions, prayer) and traditions.

In rural areas of India Diwali is also a harvest festival. It occurs at the end of a cropping season and a festival marked the prosperity that a good harvest normally brings. The celebration therefore, was begun by farmers after they reaped their harvests. They celebrated with joy and offered praises to the gods for granting them a good crop. It is easy to imagine how a successful harvest signified the blessing of the gods and the defeat of the mischievous demons that wanted to ruin the crops.

Diwali is the festival of Laxmi, the goddess of prosperity and wealth who, it is believed, visits everyone during Diwali and brings peace and prosperity to all. On the night of Diwali “Laxmi-Pujan” is performed in the evenings. This is a traditional devotional ritual performed after sunset in all the homes. Five lamps are lit in front of the deities, offerings of traditional sweets are given to the goddess and devotional songs in praise of goddess Laxmi are sung. After the Puja people light diyas (lamps) in their homes to usher in light, and clear the darkness from the world.

October 26th is also St Demetrius’s Feast Day, a saint much beloved of believers in the Orthodox faith. St Demetrius is the patron saint of the Greek city of Thessalonike (Salonika), the place of his birth and death (late 3rd, early 4th century AD).  St Demetrius was a soldier and after becoming a Christian he preached the gospel, for which he was speared to death by pagans.  He was buried in Salonika and very soon after his interment, a delicious smell of myrrh permeated the vicinity of his grave. This miraculous occurrence led eventually to the construction of a basilica over his grave, which is still the place of pilgrimage for many Orthodox Christians. The smell of myrrh can still be enjoyed in the church, giving the saint the appellation “myrrhobletus” or myrrh-spouter.

St Demetrius’s Day in Greece also marks a division of the agricultural year, marking the official end of all the summer activities, the end of contracts and work agreements and the beginning of the winter cycle.  On this day farmers must have all their produce in storehouses and food must be laid up for the winter months.  Traditionally the new wine was also opened on this day to be tasted, a good occasion for feasting and merriment. As the liberation of Salonika from Turks is also celebrated on this day, St Demetrius’s Day is an occasion of widespread carousing and feasting in this, the second largest Greek city.
Posted by Intelliblog at 00:37