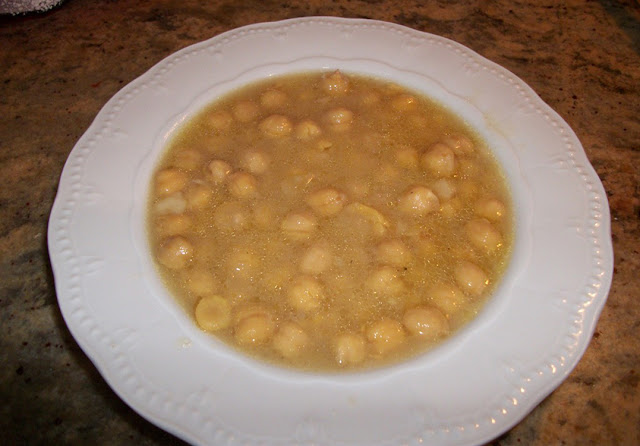 The chickpea (Cicer arietinum), also known as the ceci bean, garbanzo bean, chana (north India), Indian pea, and Bengal gram, is an edible legume of the family Fabaceae. Chickpeas are high in protein and one of the earliest cultivated foods. 7,500-year-old remains have been found in the Middle East. In classical Greece, they were called “erébinthos” and were eaten as a staple, a dessert, or consumed raw when young. The Romans knew several varieties such as venus, ram, and punic chickpeas. They were cooked down into a broth and roasted as a snack. The Roman gourmet Apicius gives several recipes for chickpeas.

Chickpeas, like most other legumes, are a bountiful source of zinc, folate and protein. They are also very high in dietary fibre and hence a healthy source of carbohydrates for persons with insulin sensitivity or diabetes. Chickpeas are low in fat and most of this is polyunsaturated. One hundred grams of mature boiled chickpeas contains 164 calories, 2.6 grams of fat (of which only 0.27 grams is saturated), 7.6 grams of dietary fibre and 8.9 grams of protein. Chickpeas also provide dietary phosphorus (49–53 mg/100 g), with some sources citing the chickpea content as about the same as yogurt and close to milk.

Around the Mediterranean, in the Middle East and right through all of the countries to India, chickpeas are a staple in the diet and in some parts of the world (for example, parts of India), chickpeas are eaten daily in large amounts and on a year-round basis. A recent study has shown that one can obtain health benefits from chickpeas even when they are eaten in much smaller quantities over a much shorter period of time.

Consumption of chickpeas regularly helps blood fat regulation, including lower levels of LDL-cholesterol, total cholesterol, and triglycerides. They also improve control of blood sugar and insulin secretion. Colonic health is improved by consuming chickpeas regularly and this is because up to 75% of the fibre found in chickpeas is insoluble fibre, and this type of fibre remains undigested all the way down to the final segment of the large intestine. Recent studies have shown that chickpea fibre can be metabolised by bacteria in the colon to produce relatively large amounts of short chain fatty acids (SCFAs), including acetic, propionic, and butyric acid. These SCFAs provide nutrition for the cells that line the intestinal wall and have an anti-cancer effect.

Here is a traditional Greek vegetarian recipe for Chickpea Soup.

Method
Put the cleaned and washed chickpeas in a large bowl and cover them with an excess of water.
Add some salt (about one tbsp.) and soak overnight.
The next morning, rinse the chickpeas, drain them and soak again, this time adding the cooking soda to the water. Leave them to soak for about an hour.
Drain, rinse and put in a saucepan, covering them with water and bring them to rollicking boil for about 15-20 minutes.
Remove and discard any foam and scum that rises to the top during this process.
Remove from the heat and leave aside.
In a frying pan, put about two-three tbsps olive oil and when it heats up, add the chopped onions, salt, pepper and nutmeg.
Fry until the onions are golden and tender, and then put the onions and oil into the chickpeas.
Return the saucepan with the chickpeas to the heat and cook until they are tender (can be up to an hour).
Keep adding warm vegetable broth to the chickpeas so that a thick soup-like consistency is maintained.
Juice the lemon(s) so that about 4 tbsp of juice is obtained and put in a cup, adding an equal amount of broth from the cooking chickpeas. Add the flour and stir well.
Put the lemon-flour mixture into the chickpeas and simmer until the soup thickens.
Serve hot with chopped parsley as a garnish, if desired.
Posted by Intelliblog at 21:48