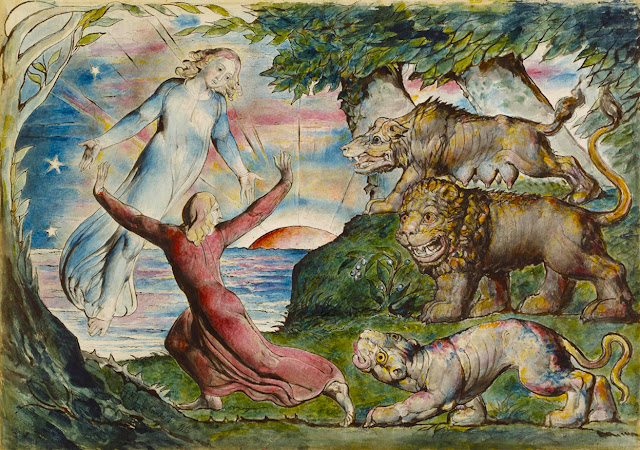 “Fun I love, but too much fun is of all things the most loathsome. Mirth is better than fun, and happiness is better than mirth.” - William Blake
William Blake (1757 - 1827) was born at 28 Broad Street, Golden Square, Soho, where his father had a hosiery business. In 1767 he began to study at Henry Pars’ Drawing Class in the Strand, and in 1771 he was apprenticed to James Basire of Great Queen Street, Lincoln’s Inn Fields, who was engraver to the Society of Antiquaries of London. In 1779 he was admitted to the Royal Academy Schools as a student.
He married Catherine Boucher, the illiterate daughter of a market gardener, in 1782 and moved to Green Street, near Leicester Square. He returned to Broad Street, this time at number 27, when his father died in 1784, to set up in business as a print seller with James Parker, a friend and former fellow apprentice. The partnership ended in 1787 and Blake moved to nearby Poland Street. In the same year Blake’s brother Robert died. Blake claimed that the spirit of Robert came to him in a vision in the night, and revealed the technique of combining text and pictures on one engraved plate.
He turned his vision into reality by hand producing the “Songs of Innocence”, using this new method in 1789 with the help of his wife, whom he had by now taught to read and write. The text and illustrations of the “Songs of Innocence” were printed from copper plates, and the illustrations then finished by hand with watercolours. Blake and his wife moved to No 13 Hercules Buildings in Lambeth in 1791 and it was in this period that he produced many of his ‘prophetic’ books: “The Visions of the Daughters of Albion”, “America a Prophecy”, “The Songs of Experience” and “The First Book of Urizen”.
In September 1800 he left London for Felpham, Sussex (about 50 miles south west of London on the south coast), to live near William Hayley, an eccentric gentleman poet who had written biographies of Milton and Cowper, and through whom he hoped to get commissions for engraving. However, by the beginning of 1803 he had tired of the trivial nature of these commissions and believed that only in London could he carry on his visionary studies.  He moved back to the capital, to 17 South Moulton Street, near Tyburn (now Marble Arch).
He began work on his illuminated books “Milton” and “Jerusalem”, but struggled to find other commercial work. In May 1809 he held an exhibition on the first floor of his brother’s hosiery shop in Broad Street, but few people attended, and he was dismissed by Robert Hunt in a review in The Examiner as “an unfortunate lunatic whose personal inoffensiveness secures him from confinement”.
After 1818 his work was rediscovered by the water-colourists of the next generation, particularly John Linnell and John Varley, who encouraged him and commissioned works. Blake died in 1827 and was buried in an unmarked grave in the dissenter’s graveyard in Bunhill Fields.
Blake was a visionary artist and poet whose personal and very individual universe was motivated by a very strong faith and feelings of justice and equality of all human beings. He abhorred slavery and believed in racial and sexual equality. Several of his poems and paintings express a notion of universal humanity: “As all men are alike (tho’ infinitely various)”. In one poem, narrated by a black child, white and black bodies alike are described as shaded groves or clouds, which exist only until one learns “to bear the beams of love”. His mystical symbolism was paramount in his creative process and his rejection of the Old Testament God for the New Testament one was instrumental in creating much of his oeuvre, which is based on the concept of brotherly love.
His paintings are remarkably modern for the time he lived in and his originality no doubt confounded many of his contemporaries. Blake claimed to experience visions throughout his life. They were often associated with beautiful religious themes and imagery, and therefore may have inspired him further with spiritual works and pursuits. Certainly, religious concepts and imagery figure centrally in Blake's works. God and Christianity constituted the intellectual centre of his writings, from which he drew inspiration. In addition, Blake believed that he was personally instructed and encouraged by Archangels to create his artistic works, which he claimed were actively read and enjoyed by those same Archangels.
The watercolour above is an illustration to "The Divine Comedy" by Dante Alighieri (Inferno I, 1-90), which Blake created in 1824-1827 (37.0 x 52.8 cm, Felton Bequest, 1920, National Gallery of Victoria, Melbourne Australia). It shows Dante running away from the three hellish beasts towards the safety embodied by his cicerone, Virgil. The painting displays an amazing composition, sense of movement and delicate, yet ominous colour for the most part. The figure of Virgil is ensheathed by light and the rising sun is symbolic of the safety and hope that the poet offers Dante. The painting is an excellent representation of Dante’s vision of Hell and one can imagine Blake attacking this project of illustrating Dante with great enthusiasm, given that while on the surface, the poem describes Dante’s travels through Hell, Purgatory, and Heaven; at a deeper level, it represents allegorically the soul’s journey towards God.
Posted by Intelliblog at 14:06