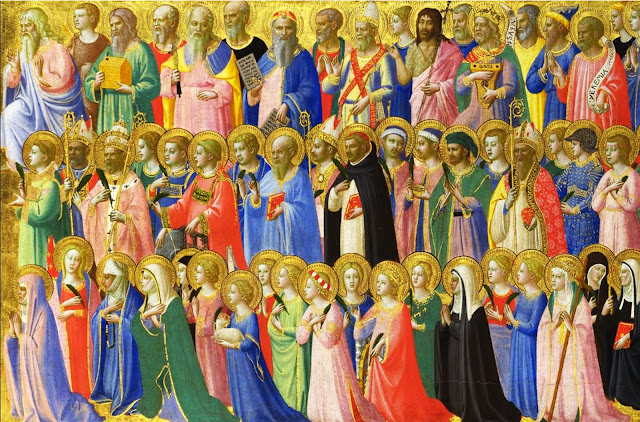 “Men are admitted into Heaven not because they have curbed and governed their passions or have no passions, but because they have cultivated their understandings. The treasures of Heaven are not negations of passion, but realities of intellect, from which all the passions emanate uncurbed in their eternal glory. The fool shall not enter into Heaven let him be ever so holy.” - William Blake

All Saints’ Day is a Solemnity celebrated on the first of November by the Catholics and to a more limited extent by the Anglicans. It is instituted to honour all the saints, known and unknown, and, according to Pope Urban IV, to supply any deficiencies in the faithful’s celebration of saints’ feasts during the year.

In the early days of Christianity, the faithful were accustomed to solemnise the anniversary of a martyr’s death for Christ at the place of martyrdom. In the fourth century, neighbouring dioceses began to interchange feasts, to transfer relics, to divide them, and to join in a common feast, as is shown by the invitation of St. Basil of Caesarea (397 AD) to the bishops of the province of Pontus.

As it was common for groups of martyrs to have suffered the same dire fate on the same day, it was natural to commemorate them in a group. In the persecution of Diocletian the number of martyrs became so great that a separate day could not be assigned to each. But the Church, feeling that every martyr should be venerated, appointed a common day for all. The first trace of this we find in Antioch on the Sunday after Pentecost. We also find mention of a common day in a sermon of St. Ephraim the Syrian (373 AD), and in the 74th homily of St. John Chrysostom (407 AD).

At first only martyrs and St. John the Baptist were honoured by a special day. Other saints were added gradually, and increased in number when a regular process of canonisation was established; still, as early as 411 AD there is in the Chaldean Calendar a “Commemoratio Confessorum” for the Friday after Easter. In the West Pope Boniface IV, on the 13 May, 609 AD, consecrated the Pantheon in Rome to the Blessed Virgin and all the martyrs, ordering an anniversary.

Pope Gregory III (731-741 AD) consecrated a chapel in the Basilica of St. Peter to all the saints and fixed the anniversary for their commemoration on 1 November. A basilica of the Apostles already existed in Rome, and its dedication was annually remembered on May 1. Pope Gregory IV (827-844 AD) extended the celebration on 1 November to the entire Church. The vigil seems to have been held as early as the feast itself. The octave was added by Pope Sixtus IV (1471-84 AD).

All Catholics are obliged to attend mass on this day, being one of the major feasts of the Roman Catholic faith. In England the festival was known as All Hallows, hence the name of the preceding day, Halloween.  The Christian feast has melded with the Celtic feast of Samhain, the pagan of New Year festival when crops were blessed, stored fruits and grains were hallowed and the dead were remembered.
All the gods of this world were worshipped on this day
From sunrise to sunset.
When All Saints’ comes on Wednesday,
The men of all the earth will be under affliction.
Children born on All Hallowstide were sure to have the second sight and all November’s children were lucky, beloved and fortunate in their life:
November’s child is born to bless
He’s like a song of thankfulness.
A couplet from An Early Calendar of English Flowers remarks upon the scarcity of flowers at this time:
Save mushrooms, and the fungus race,
That grow till All-Hallow-tide takes place.
The weather on this day should be observed as it gives an indication of what lies ahead:
If ducks do slide at Hallowentide
At Christmas they will swim;
If ducks do swim at Hallowentide
At Christmas they will slide.
As the next day is All Souls’ Day, “soul cakes” were made on this night for distribution to the poor.  The recipients of these cakes prayed for the souls of the departed, interceding on their behalf.  The returning, visiting souls of the dead on this day were thought to somehow be able to partake of these “soul cakes”.
Posted by Intelliblog at 09:38