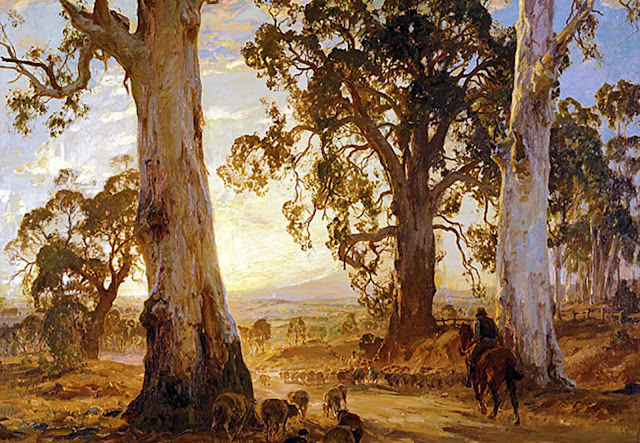 Hans Heysen was born in Hamburg, Germany in 1877 and migrated to Adelaide, South Australia with his family at the age of six. As a young man in new surroundings, Heysen showed an early interest in art. He dropped out of school at 14 to work as a hardware merchant and study at art school in the evenings. Drawing and design became vital to Heysen’s art and ideology. Through his accomplishments as a draughtsman, Heysen developed a great control of line and shape and this is evident in his paintings, but also in his studies drawn in pencil, pen, chalk and charcoal.

Heysen was very fortunate with patrons and at only the beginning of his career as an artist, four prominent Adelaide businessmen were so impressed by his enthusiasm that they agreed to sponsor his studies in Europe, in lieu of the right to sell whatever he painted abroad. Later he sold art works to the State galleries in Sydney, Melbourne and Adelaide and carried out commissions for prominent patrons such as Dame Nellie Melba and the Governor of Victoria.

After hosting his second solo exhibition in Melbourne in 1912, Heysen was able to afford to purchase a property “The Cedars”, near Hahndorf in the Adelaide hills. He lived there for the rest of his life recording the essence of the landscape and the labours of the German farmers in the fields, until his death in 1968. The property was the inspiration for many of Heysen’s famous subjects, gigantic gums, timber hauling and toilers, and is open to the public to this day.

Heysen’s artwork is highly traditional. Whilst he painted Australian subjects such as the Hahndorf pastorals, the Flinders Ranges and his iconic gums, they are strongly influenced European models of dark and light compositional elements, which distil the essence of the harsh Australian light. His animal and bird studies feature the cattle, sheep, pigs and ducks of his own farmyard, rather than Australian mammals. However, Heysen helped define a national identity for Australia through his original approach to the Australian landscape, light and rural life.

Best known for his watercolours of the bush, Heysen won the prestigious Wynne Prize for landscape painting an astonishing nine times. The first win was in 1904 with the famous large oil, “Mystic Morn” which now belongs to the Art Gallery of South Australia. Heysen produced an enormous body of work and his pictures have been enthusiastically collected across the country since the beginning of the twentieth century. Knighted in 1959, Sir Hans Heysen holds a distinctive place as one of the nation’s most honoured artists of the Federation era.

The Heysen Trail in South Australia was named after Sir Hans Heysen. This is a long distance walking trail in South Australia. It runs from Parachilna Gorge, in the Flinders Ranges via the Adelaide Hills to Cape Jervis on the Fleurieu Peninsula and is approximately 1,200 kilometres long. Heysen’s daughter, Nora Heysen, was also a successful artist.

Heysen’s “Droving into the Light” (1914-21) is an iconic painting that is highly representative of this artist’s work. It is exhibited in the Art Gallery of South Australia and is a large oil on canvas, 121.9 (h) x 152.4 (w) cm. It is a gift of Mr W H Vincent, in 1922. Although it deals with the droving of sheep, the painting depicts the majesty of Australian eucalyptus trees. The combination of the gum-tree motif with a theme of end-of-day homecoming is symbolic of a new age: A unified Commonwealth of Australia had been created and was still in the process of formation. "Droving into the Light" is one of Australia’s greatest Federation pictures.

The gum trees set the scene, leading the eye into a sunbathed landscape beyond. Its dynamic compositional elements, rich colour, fine draughtsmanship make of this painting a successful, complex visual treat. It demonstrates Heysen’s successful use of light and is my favourite of all his gum-tree paintings in oil. The painting pivots upon the the River Red Gum right of centre. The River Red Gum was in fact an afterthought. Heysen recalled in 1954 that it was introduced to remedy a compositional disharmony:
“I realised the weakness of the composition and repainted portions, introducing the large central Red Gum. This helped to bind the two sides and made a great improvement, materially enhancing the whole conception.”
Posted by Intelliblog at 10:53