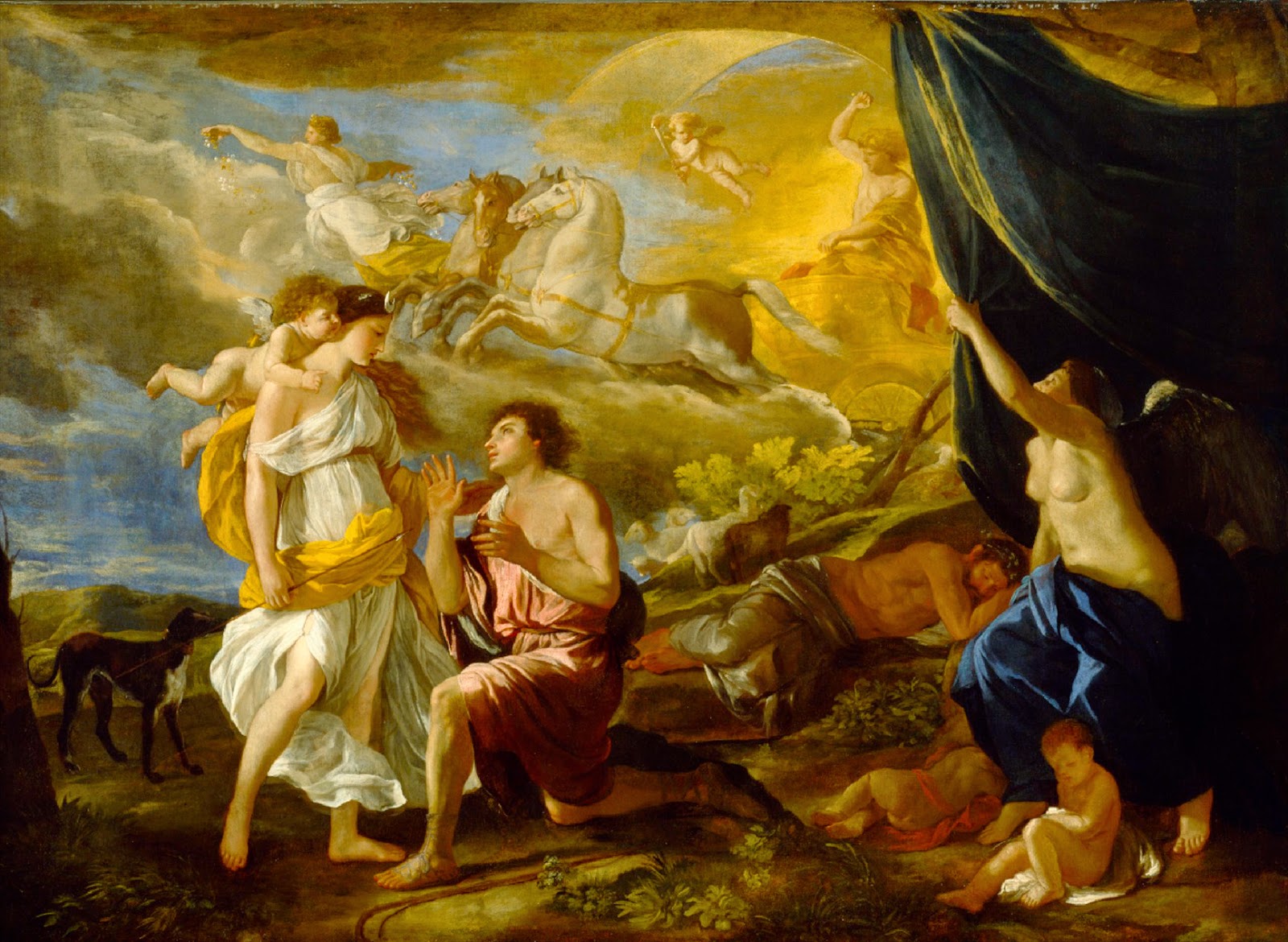 “Each day is a little life: Every waking and rising a little birth, every fresh morning a little youth, every going to rest and sleep a little death.” - Arthur Schopenhauer


Nicolas Poussin (15 June 1594 – 19 November 1665), the greatest French Baroque artist of the 17th century, is considered one of the founders of European classicism, a movement in art, based on antique and Renaissance heritage. His work is characterised by clarity, logic, and order, and favours line over colour. Until the 20th century he remained a major inspiration for such classically oriented artists as Jacques-Louis David, Jean-Auguste-Dominique Ingres and Paul Cézanne.

Poussin was born in Normandy, in Les-Andelys, in 1594. The son of an impoverished family, Poussin received some early professional training at home. In 1612, Poussin left for Paris, where he entered the workshop of the mannerist painter J. Lallemald. The training was reinforced by independent study of, mainly, Italian art in the Royal Collections. By the end of the 1610s Poussin became an authoritative master, the evidence of this are his commissions for the decoration of the Luxembourg Palace in Paris, and the big altarpiece “Assumption of the Virgin”. Unfortunately from the works of the first Paris period (1612-23) only drawings based on Ovid’s Metamorphoses survived.

In 1623, the artist came to Italy, first to Venice, where he enriched his French training with the sensuous splendour of Venetian painting. And in 1624, he came to Rome, where he stayed all his life, except for his trip to Paris in 1640-42. Poussin’s new friends in Rome were mainly classical scholars, who played the main role in turning Poussin into a philosopher, erudite and intellectual. The 1620s in Italy were years of intensive learning for Poussin, and active creative work. Within four years he achieved a young painter’s highest aim, he was commissioned to paint an altarpiece for a chapel in St. Peter’s Cathedral (“Martyrdom of St. Erasmus”, 1628-29). At that period he acquired the dynamic style already dominant in Europe, the style that we now know as Baroque. It was at this time that he produced the most baroque of all his pictures, the altarpiece “The Virgin of the Pillar Appearing to St. James the Greater”, which was ordered for a church in the Spanish Netherlands. Eventually this work reached not the town of Valenciennes but the collection of Cardinal Richelieu and finally came to Louis XIII and to the Louvre.

Poussin was evidently frustrated and disappointed by his lack of success in the intensely competitive field of baroque altarpiece painting. He never attempted this style again. After a short crisis he chose the more restrained and intellectual direction of development, which appealed to the learned tastes of his Roman friends. In 1629, Poussin married his landlord’s daughter. The first Roman period (1624-30) on the whole is characterised by mythological themes, with sweet love, poetical inspiration, carefree happiness in harmony with nature.

In the next decade history became the main subject of Poussin’s work. The artist is attracted by situations, in which the moral qualities of people reveal themselves. In pictures of the 1630s the compositions are complex and compound with many characters, they remind of the classical tragedy on stage. Poussin used a special box and wax figures: First he built his compositions, then started to draw preliminary sketches, and only then painted. The best-known works of the period are: “The Rescue of Pyrrhus” (1634), “The Noble Deed of Scipio” (1640).

Very popular in his time were the so-called bacchanal series, commissioned by Cardinal Richelieu. One of them, which survived, is “Triumph of Neptune and Amphitrite” (1634). Those paintings were supposed to decorate the cardinal’s palace, and this fact indicates that the interest to Poussin in France grew. In the second half of the 1630s the young artists in Paris chose to follow Poussin’s style in historical genre. The King’s officials wanted to return the artist to France. Poussin did not hurry back. He came to France only in 1840, after they had passed him the King’s threat.

In Paris Poussin was immediately appointed the person in charge of all art works in the King’s palaces. This caused violent jealousy on the part of other court artists; Vouet headed the opposition. For about two years Poussin painted altarpieces, canvases for Richelieu and supervised the decorative works in the Big Gallery in Louvre. Surrounded by hatred and jealousy, Poussin did not finish the work and fled to Rome. His artistic and moral ideals stood in conflict with those of the monarch. In the late Roman period (1642-65) Poussin continued to work mainly in historical genre. The most important work of that period is the series “Seasons” (1660-64). Poussin’s work influenced the further development of European painting. His authoritative interpretations of ancient history and Greek and Roman mythology left their mark on European art down to the 19th century.

Above is his "Selene and Endymion" of 1630. Selene (on the left, draped in white), was the Greek goddess of the moon. Endymion, her human, mortal lover, kneels before her. Endymion was a shepherd king and the dog, sheep and goats point to that. Selene loved Endymion and asked Zeus to let him become immortal so that he could be with her forever. Zeus gave Endymion given two options: Continue life as a human, loving Selene until his death, or alternatively become immortal and live forever young, the catch with the second option being he would have to spend eternity asleep… Endymion chose immortality and youth in eternal slumber. He was lain in a cave on Karian Mount Latmos where his lover the Moon would visit him each night. Selene and Endymion had fifty daughters (obviously Endymion was a light sleeper) who are equated by some scholars with the fifty months of the Olympiad.

Towards the upper back is the chariot of Helios, the Greek sun god, Selene’s brother. In front of the chariot is Eos, another sister of Selene and Helios and the goddess of the dawn. She rose each morning from her home at the edge of the Oceanus and scattered roses, heralding the arrival of her brother Helios, the sun. The sleeping figure on the right foreshadows Endymion’s choice of eternal sleep and the woman drawing the curtain is probably Nyx, the Greek goddess (or personification) of the night. A shadowy figure, Nyx stood at or near the beginning of creation, and was the mother of other personified deities such as Hypnos (Sleep) and Thanatos (Death). Her appearances are sparse in surviving mythology, but reveal her as a figure of such exceptional power and beauty, that she is feared by Zeus himself. She is found in the shadows of the world and only ever seen in glimpses.

This tableau is very theatrical and illustrates Poussin’s sense of drama, beautiful sense of colour and a complex composition. Selene and Endymion’s relationship is interesting as depicted by Poussin. The youth is a supplicant before the moon goddess, adoring her religiously. Selene holds love’s arrow in her hand, and she is as much a victim of Cupid as any mortal, but her gaze is one of a possessor and of a person in power. The goddess is magnificent and supernatural, but susceptible to human passions, as mortals are…
Posted by Intelliblog at 00:15