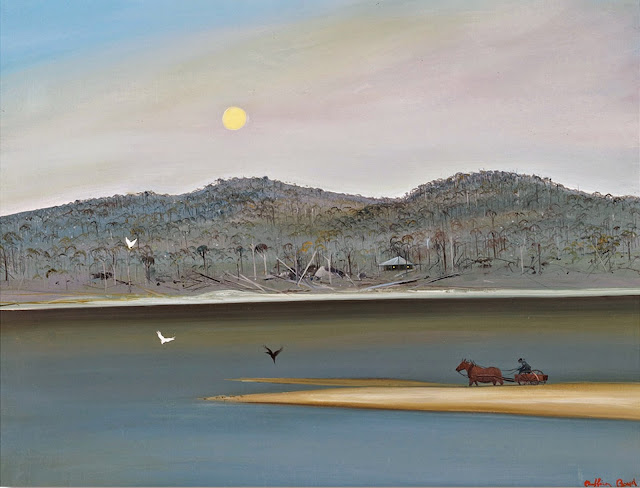 Arthur Boyd was born in Murumbeena, Australia in 1920. He came from a long line of artists: Painters, potters, writers, musicians; which may explain his own versatility in creating works with paint, ceramics and print techniques. Even as a youth under the tutelage of his family he was creating art worthy of an accomplished artist.

He lived in London in 1960 and exhibitions of his work there in the early ‘60s established his reputation in Britain. His themes and images remained purely Australian in his work, with the powerful presence of the Australian bush, the Aborigines and the colonists ever a feature, even in his biblical paintings. His work remained figurative while his colleagues were painting abstract canvases, as his brush always needed to express emotions and feelings that spoke even to the most artistically uneducated lay person.

After his time in the army during WWII, Boyd returned to Melbourne where he came in contact with John and Sunday Reed and the Contemporary Art Society. In 1945, he married Yvonne Lennie and lived at Murrumbeena where he made pots and other ceramics. He first found public recognition with his Wimmera and Berwick landscapes of the 1940’s and 1950’s. In 1959, he moved to Europe where he exhibited his best known series, “Love, Death and Marriage of a Half-Caste Bride”, based on his observations of the Aborigines in Australia.

He returned to Australia in 1971 and in 1973 purchased a property on the Shoalhaven River on the NSW south coast. His beloved landscapes of the Shoalhaven have become some of his most loved and recognisable works. Throughout his lifetime Boyd generously donated both his properties and thousands of works to the Australian public.

He was awarded many prizes and awards, including an Order of Australia and a Retrospective exhibition travelled Australia in 1993. Boyd’s work is represented in the National Gallery of Australia, all state galleries, many regional galleries and numerous public and private collections, both nationally and internationally. In 1995, Boyd was named Australian of the Year for his extraordinary contribution to Australian art and his great generosity to the Australian nation.

His paintings are sensuous, approachable, painterly and glorify in the wondrous quality of the medium he is using. He died in Melbourne in 1999. Bryan Robertson, says in his ‘Boyd in London: A Friend Remembers’, published in the Australian Art Collector:
“The death of Arthur Boyd in his 79th year was a great loss to Australian painting and a special sadness for those who have some knowledge of the richness and diversity of Australian painting in this century and have witnessed, if only at the irregular intervals of his London shows, the tremendous contribution to that richness made by Boyd in the past five decades.”

The painting above is “Jinker on the Spit, Shoalhaven” of 1981. It is oil on composition board, 44.2 x 59.2 cm in a Private Collection, Melbourne. Boyd says of this painting: “I have done several pictures with jinkers in them. In one I used black swans, but in this one I made them crows. There are so many crows at Riversdale that you are aware of them all the time.”