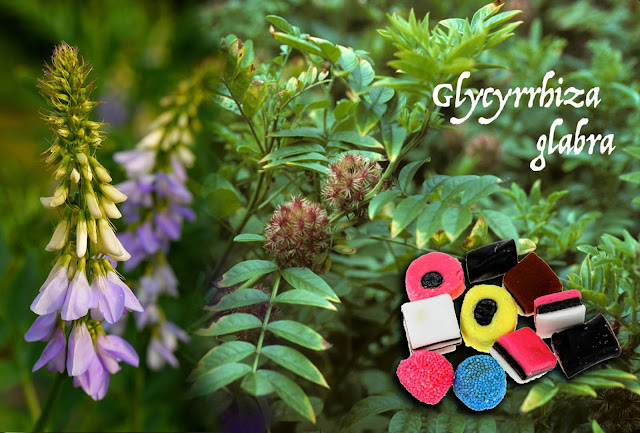 “We’re like licorice. Not everybody likes licorice, but the people who like licorice really like licorice.” - Jerry García
Liquorice, or licorice, is the root of Glycyrrhiza glabra, a plant in the Fabaceae family, from which a sweet flavour can be extracted. The liquorice plant is a herbaceous perennial legume native to southern Europe and parts of Asia, such as India. It is not botanically related to anise, star anise, or fennel, which are sources of similar flavouring compounds. Most liquorice is used as a flavouring agent for tobacco, particularly US blend cigarettes, to which liquorice lends a natural sweetness and a distinctive flavour and makes it easier to inhale the smoke by creating bronchodilators, which open up the lungs.

Liquorice flavours are also used as candies or sweeteners, particularly in some European and Middle Eastern countries. Liquorice extracts have a number of medical uses, and they are also used in herbal and folk medications. Excessive consumption of liquorice (more than 2 mg/kg/day of pure glycyrrhizinic acid, a liquorice component) may result in adverse effects, and overconsumption should be suspected clinically in patients presenting with otherwise unexplained hypokalaemia and muscle weakness.

The word liquorice is derived (via the Old French licoresse) from the Greek γλυκύρριζα (glukurrhiza), meaning “sweet root”, from γλυκύς (glukus), “sweet” + ῥίζα (rhiza), “root”, the name provided by Dioscorides. It is usually spelled liquorice in British usage, but licorice in the United States and Canada.

The plant is a herbaceous perennial, growing to 1 m in height, with pinnate leaves about 7–15 cm long, with 9–17 leaflets. The flowers are 0.8–1.2 cm long, purple to pale whitish blue, produced in a loose inflorescence. The fruit is an oblong pod, 2–3 cm long, containing several seeds. The roots are stoloniferous. Liquorice grows best in well-drained soils in deep valleys with full sun and is harvested in the autumn two to three years after planting. Countries producing liquorice include India, Iran, Italy, Afghanistan, the People’s Republic of China, Pakistan, Iraq, Azerbaijan, Uzbekistan, Turkmenistan,Turkey, and England. The world's leading manufacturer of liquorice products is M&F Worldwide, which manufactures more than 70% of the worldwide liquorice flavours sold to end users.

The scent of liquorice root comes from a complex and variable combination of compounds, of which anethole is up to 3% of total volatiles. Much of the sweetness in liquorice comes from glycyrrhizin, which has a sweet taste, 30–50 times the sweetness of sugar. The sweetness is very different from sugar, being less instant, tart, and lasting longer. The isoflavene glabrene and the isoflavane glabridin, found in the roots of liquorice, are phytoestrogens.

Liquorice flavour is found in a wide variety of candies or sweets. In most of these candies, the taste is reinforced by aniseed oil so the actual content of liquorice is very low. Liquorice confections are primarily purchased by consumers in the European Union. In the Netherlands, liquorice candy (drop) is one of the most popular forms of sweets. It is sold in many forms. Mixing it with mint, menthol, aniseed, or laurel is quite popular. Mixing it with ammonium chloride (salmiak) is also popular. The most popular liquorice, known in the Netherlands as zoute drop (salty liquorice), actually contains very little salt, i.e., sodium chloride. The salty taste is probably due to ammonium chloride and the blood pressure-raising effect is due to glycyrrhizin. Strong, salty sweets are also popular in Nordic countries.

Pontefract in Yorkshire was the first place where liquorice mixed with sugar began to be used as a sweet in the same way it is in the modern day. Pontefract cakes were originally made there. In County Durham, Yorkshire, and Lancashire, it is colloquially known as ‘Spanish’, supposedly because Spanish monks grew liquorice root at Rievaulx Abbey near Thirsk. In Italy (particularly in the south), Spain, and France, liquorice is popular in its natural form. The root of the plant is simply dug up, washed, dried, and chewed as a mouth freshener. Throughout Italy, unsweetened liquorice is consumed in the form of small black pieces made only from 100% pure liquorice extract; the taste is bitter. In Calabria a popular liqueur is made from pure liquorice extract.

Liquorice is also very popular in Syria and Egypt, where it is sold as a drink, in shops as well as street vendors. It is used for its expectorant qualities in folk medicine in Egypt. Dried liquorice root can be chewed as a sweet. Black liquorice contains about 15 kJ/g. Liquorice is used by brewers to flavour and colour porter classes of beers, and the enzymes in the root also stabilise the foam heads produced by beers brewed with it.

Glycyrrhizin has demonstrated antiviral, antimicrobial, anti-inflammatory, hepatoprotective, and blood pressure-increasing effects in vitro and in vivo, as is supported by the finding that intravenous glycyrrhizin (as if it is given orally very little of the original drug makes it into circulation) slows the progression of viral and autoimmune hepatitis. In one clinical trial liquorice demonstrated promising activity, when applied topically, against atopic dermatitis.

Additionally, liquorice may be effective in treating hyperlipidaemia (a high amount of fats in the blood). Liquorice has also demonstrated efficacy in treating inflammation-induced skin hyperpigmentation. Liquorice may also be useful in preventing neurodegenerative disorders and dental caries. The antiulcer, laxative, antidiabetic, anti-inflammatory, immunomodulatory, antitumour and expectorant properties of liquorice have been investigated. The compound glycyrrhizin (or glycyrrhizic acid), found in liquorice, has been proposed as being useful for liver protection in tuberculosis therapy, but evidence does not support this use, which may in fact be harmful. The United States Food and Drug Administration believes that foods containing liquorice and its derivatives (including glycyrrhizin) are safe if not consumed excessively. Other jurisdictions have suggested no more than 100 mg to 200 mg of glycyrrhizin per day, the equivalent of about 70 to 150 g of liquorice.

In the language of flowers, a sprig of flowering wild liquorice means: “I declare against you”. Dried root incorporated in a bouquet implies: “Your company is sweet and agreeable”.
Posted by Intelliblog at 19:31