A QUIZ FOR THURSDAY 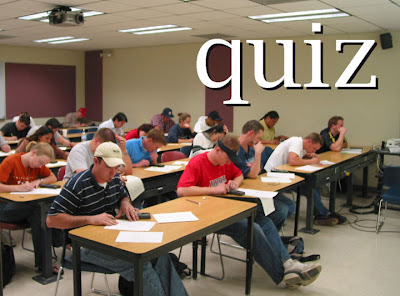 This is a very busy time of the year for me as it is the end of semester and the fast approaching end of the academic year. Between now and Christmas, all sorts of things happen in a University that could not be done during the normal semester times. This also gives me the opportunity to apologise to all of you as I haven’t been able to visit your pages as much as I would have wanted to. Work and life get in the way of the really important things like… blogging!

As the examination period is right about now and much of time will be taken up by examining students, correcting papers, setting additional quizzes, giving viva voce examination and marking theses, the word of the day is appropriately:

There is an apocryphal story regarding the origin of the word quiz, which is in all probability improbable. It concerns a Dublin theatre proprietor by the name of Richard Daly who apparently made a bet that he could, within forty-eight hours, make a nonsense word known throughout the city, and that the public would give a meaning to it. After the performance one evening, he gave his staff cards with the word “quiz” written on them, and told them to write the word on walls all around the city.

The next day the strange word was the talk of the town, and within a short time it had become part of the language, its meaning being taken from the questions that every asked about its meaning! This picturesque tale appeared as an anecdote in 1836, but the most detailed account (in F. T. Porter's Gleanings and Reminiscences, 1875) gives the date of the exploit as 1791.

The word, however, was already in use by then, meaning 'an odd or eccentric person', and had been used in this sense by Fanny Burney in her diary on 24 June 1782. 'Quiz' was also used as a name for a curious toy, something like a yo-yo and also called a bandalore, which was popular around 1790. The word is nevertheless hard to account for, and so is its later meaning of 'to question, to interrogate', which emerged in the mid-19th century and gave rise to the most common use of the term today, for an entertainment based on questions and answers.

Other etymologists prefer to relate the word to the Latin question: Qui es, meaning “Who are you?” In any case it is probably from the same root as question and inquisitive (Latin: quaerere “ask, seek”).

Enjoy your Word Thursday, which apparently Jacqui BB has taken under her wing. Thank you, Jacqui!
Posted by Intelliblog at 22:37