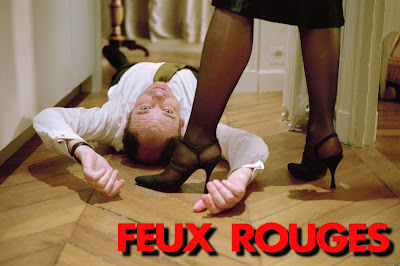 “No good movie is too long and no bad movie is short enough." - Roger Ebert

We watched an interesting French movie yesterday and in some ways it was reminiscent of the classic film noir genre, but also there were elements of modern expressionism and psychological thriller overtones in it. The film is “Feux Rouges” (Red Lights) by Cédric Kahn, based on a book by Georges Simenon (of Inspector Maigret whodunit fame). The film is based on some amazing performances by the three leads, Jean-Pierre Daroussin (the husband), Carole Bouquet (the wife) and Vincent Deniard (the hitchhiker).

Antoine and Hélène seem to be a typical married couple in the opening frames of the film and they begin their summertime drive to South France to pick up their kids from a holiday camp. The road traffic is heavy and the atmosphere becomes tense. Antoine stops at almost every bar they meet and becomes increasingly drunk the further they progress. After a fierce argument Hélène leaves Antoine at a bar and decides to take the train to Bordeaux. They each have an experience that changes their life forever.

The film is a wry study of the middle-aged male psyche and all of the attendant misfortunes that the prospect of incipient old age brings with it. Here is the dissection of the life of a man who has reached a crisis point and finds himself doubting his worth, his virility, his position in society and his diminishing sense of innate worth. He believes his professionally successful wife has a lover, he sees his children become distant as his job absorbs his energy and time and he believes that alcohol is his only solace. A dangerous situation that ticks away like a time bomb set to explode that very night.

There are similarities in this film to some of Hitchcock and Kubrick. The director plays with the audience like a cat with a mouse and we squirm as we witness Antoine’s descent into the depths of night, a dark night of the soul in which his alcohol-steeped nightmares seem to become a mind shattering reality. We are left to doubt what we see through Antoine’s eyes as his world is one that is full of horrific fantasies, weird illusions and almost demented and cruel actions of impotent wish-fulfillment.

The cinematography is very good and the opening sequences with the quasi geometric shots of modern city architecture from a great height set the scene wonderfully by dwarfing the people and making the concrete shapes alienate the flesh and blood in a way that is prophetic for the film’s heroes. The music score is by Frenchman Debussy, whose “Nuages” provide an interestingly serene and dispassionate counterfoil to the raw emotions of the characters.

Red Lights is a good film, brought to life by the magnificent acting of Daroussin, who gives his all in a brilliant character study that is disguised as a thriller. Antoine is both hero and anti-hero and although he is not at all likable, he still manages to make us feel for him, and we empathise with his predicament. As Alfred Hitchcock says: “Always make the audience suffer as much as possible.” And then your film is successful…
Posted by Intelliblog at 00:52