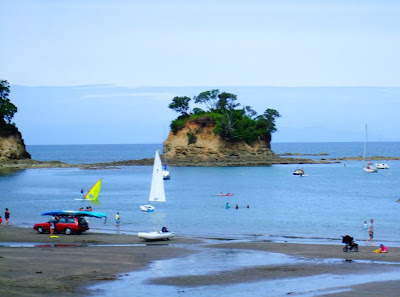 We bought a Discovery Day Pass today for $13 each and with it we were able to travel on any of the public transport vehicles (trains, ferries, buses) for the whole day in all parts of the Auckland metropolitan area. This proved to be a wise decision that allowed us to see quite a lot of the city and the suburbs efficiently and cheaply. We chose to go North of the city and visit several of the seaside suburbs, some of which are quite idyllic. We were surprised by how hilly is the area that the greater Auckland is built on.

We went first to Devonport and Takapuna, built on a peninsula directly opposite the Waitemata Harbour. Both of these suburbs are quite lovely, especially Devonport, which has a country town charm and is very much geared towards the tourist and the holidaymaker. There are numerous tourist shops, art galleries, cafés, restaurants, bars, parks and other facilities for both locals and tourists who wish to relax and get away from the hustle and bustle of Auckland. The town is accessible by ferry from Auckland, the ride taking only 15 minutes. Alternatively one may go by bus via Takapuna.

Takapuna is more suburban and cosmopolitan, but there is also a holiday feel to the suburb, as there are excellent hotel facilities, a long swimming beach with white sands and the same tourist shops and facilities that the visitor expects. Whereas Devonport is more historical, Takapuna is more modern sporting even a couple of high rise apartment buildings and a big Westfield shopping centre, as well as the old style shopping strip.

We then took the bus and travelled up the north coast to the Eastern bays, going as far as up Torbay and the recreation area of Long Bay Regional Park. Long Bay is a lovely spot where sandy beaches alternate with rocky bluffs and is the first area to the North of Auckland outside the greater metropolitan area. This is a very popular spot for holidays, camping, swimming and relaxation. Coming back from Torbay, which is a small town sitting on the crest of a hill with magnificent views, one comes down to Browns Bay, which is another seaside suburb that has a large shopping area, beach facilities and where quite few retirees seem to live. We then took the bus back to Takapuna and finally back to Auckland.

Something which we noted was that New Zealand senior citizens travel free on public transport on presentation of their “Gold Pass”. This is such a good idea and a sign of an enlightened government. Several other observations made us think that the government both local and national seems to be taking care of its citizens well, better than Australia is doing presently. Australia was as New Zealand is in this respect about 25-30 years ago. Globalisation and following US trends has made the social welfare system deteriorate in Australia in the last couple of decades. All’s the pity as the lifestyle for the majority of people seems a lot better in New Zealand than in Australia at the moment.

The weather was absolutely wonderful today, hovering in the mid-20s with a gentle sunshine and no wind. The weather bureau is warning about rain tomorrow, so it was a good idea that we ventured out north today!
Posted by Intelliblog at 14:46