LILIES FOR OUR LADY OF GREECE... 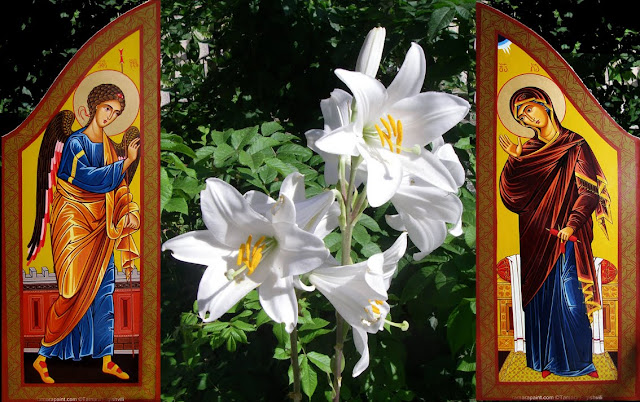 The Madonna lily, Lilium candidum, is this day’s birthday flower.  It is a bloom that is closely associated with the Virgin Mary, the white petals symbolising her body and the yellow anthers her soul.  Doubting Thomas caused the Virgin’s tomb to be opened up after the Assumption as he doubted that she had been lifted to heaven, and it was found to contain nothing but beautiful  roses and lilies.  Traditionally, the plant is said to bloom from the Feast of the Visitation to St Swithin’s day:
From Visitation to St Swithin’s showers,
The lilie white reigns, queen of flowers.

Other Christian legends attribute the sprouting of the white lily from the tears of the repentant Eve as she was ousted from Paradise.  In Greek legend, the flower was sacred to Hera, wife of Zeus and symbolised motherhood and marriage.   The origin of the flower is related to the ruse played upon Hera by Zeus so that he might allow his illegitimate son by Alkmene, Herakles, to suckle upon Hera’s breast. Zeus told Hypnos, the god of sleep to visit Hera that she may sleep. Zeus then placed the baby Herakles upon her breast, who then voraciously suckled the milk of immortality from Hera.  Drops of milk scattering to the earth sprouted the lily, while drops of milk squirting up into the sky generated the Milky Way (galaxias = milky in Greek). The flower symbolises purity and if a man trampled on lilies in a garden, it meant that one of the daughters of the household would be shamed.  Many blooms in a season indicated that bread would be cheaper and smelling a lily caused freckles to appear (no doubt related to the traces of pollen left behind on the nose!).  The lily is symbolic of the Annunciation, Easter, sinlessness, heavenly bliss, beatitude and charity.  Astrologically, it belongs to the moon.

Lady Day is the day when the church commemorates the feast of the Annunciation. It was on this day that the archangel Gabriel proclaimed to the Virgin that she would conceive and bear a son nine months later. His name would be Emmanuel.
Ave Maria, gratia plena
Dominus tecum:
Benedicta tu in mulieribus.

Hail Mary, full of grace
The Lord is with you:
Blessed are you amongst women.
Luke I:28

Behold, a virgin shall conceive,
And bear a son
And he shall be called Emmanuel.
Fed on butter and honey,
He will grow to the age of refusing what is bad
Choosing what is good.
Isaiah VII:14-15

Today is also the National Day of Greece, which commemorates the day the Greek War of Independence against the Turks began in 1821. This was to finally liberate the country after 400 years of Turkish occupation. Greece is a Southern European country surrounded by seas, the Aegean to the East, the Ionian to the West and the Cretan to the South.  It gained its independence from Turkey in 1821 and has had a history of political upheavals since then. It is a country of islands and mountains, hot dry summers and cool to mild winters.  The fertile plains are few, most of the land being poorly watered and drained, and too rocky or mountainous for farming.  Greece, nevertheless is one of the world’s largest producers of olives and olive oil with other agricultural produce also being exported to the rest of Europe.  It has an area of about 132,000 square km and a population of about 11 million.  Athens is the capital city with other major centres being Thessaloniki, Patras, Volos, Larissa, Iraklion and Kavalla.  Tourism is a major economic boost but the clothing and footwear industries also contribute.

Greece, like many other European countries, presently finds itself in dire economic and financial straits with its public purse at least 50 billion Euros in the red. This is giving rise to immense hardship for the majority of the population and is the cause of great uncertainty for the immediate future. It is not only a European problem as the deteriorating economic situation there would have immense consequences in Europe and then by extension, around the world. It is calculated that given the present birth rate, each Greek baby that is born, is born with a $30,000 Euro debt on its head. Whether the European Union and/or the International Monetary Fund will “rescue” Greece or not, still remains to be decided. However, at the moment the government is desperately trying to cut expenditure and increase taxes in a last ditch attempt to try to save the economy and convince Europe that it is “worthy” of being rescued. In the background are opportunists that will step in to lend the money that is needed at exorbitant interest rates, which will harm more rather than help.

What caused Greece to end up in this financial black hole? Well, years of reckless spending, corruption, graft, tax-evasion, crime, illegal immigration and “black money”, with the rich getting richer and the poor poorer. The politicians have been exposed with their hands in the public purse in numerous scandals, while even the ordinary persons in the street have been living beyond their means and have enormous debts on credit cards and personal loans. Greece embraced with gusto the “modern” Western consumerist lifestyle, which it could ill-afford. Productivity decreased as imports increased and exports decreased. Urbanisation made deserts of the rural areas and farming has been relegated to serfs (usually illegal immigrants) who are usually taken advantage of. Greeks have been spending money they do not have and have been celebrating with gusto their decadence. Surely such a situation is not tenable…
Posted by Intelliblog at 22:08