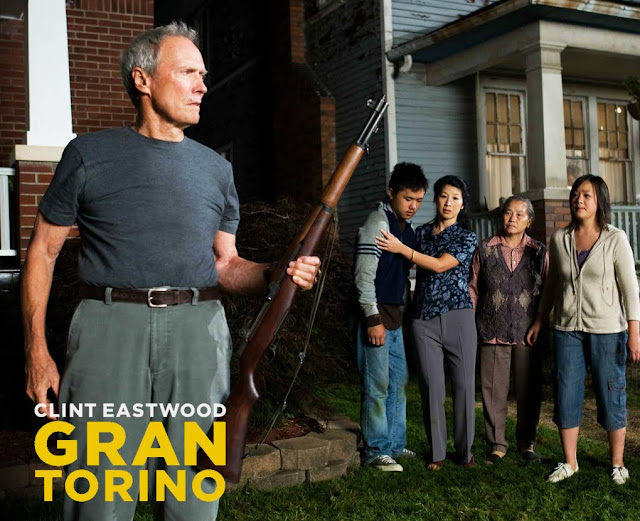 “To live anywhere in the world today and be against equality because of race or color is like living in Alaska and being against snow.” - William Faulkner

Clint Eastwood has developed in his career from an “action hero” who played in spaghetti Westerns and bad cop movies to well-rounded artist who directs and acts in some of the best films to come out of Hollywood in the last few years. Yesterday we watched his 2008 movie “Gran Torino”, which he directed and starred in. It was an excellent film – gruelling and challenging to watch, but at the same time significant in its message. It made a serious comment on contemporary American society without overstatement, no trace of disingenuousness and with an honesty that one usually does not associate with Hollywood films. The screenplay by Nick Schenck is based on a story by Dave Johansson and it hits hard on all the right spots.

By way of contrast, the previous day we had watched Kevin Kostner’s 1997 sickly saccharine, patriotic extravaganza “The Postman”. This was a film that had good intentions, and as an idea it was great, but it is weighed down by so much sentimental schmaltz that it is hard to take it seriously. It was a contemporary Western in its scope and it had touches of pap that ensured the acceptance and endorsement of the patriots. It was such a predictable and emotionally manipulative film that it was offensive. What a difference from the gutsy and genuine “Gran Torino”.

“Gran Torino” is about prejudice and racism, primarily, but it also has as its theme cultural values of contemporary America, changing definitions of families, the blight of gangs and the vulnerability of youth. It is also about courage and about making decision that redeem our lives. Religion is also touched upon. Although I abhor violence in films, the violence in this movie was an integral part of the action (essential to the story, I would say), but it was not overt and excessive. The implicit violence was much more horrible and justly obscene.

The story concerns a recently widowed old man, Walt Kowalski (Clint Eastwood), who is embittered and grumpy and dissatisfied with his neighbourhood, in which he seems to be the only white American. He doesn’t get on with his sons or his grandchildren and his only consolation is his 1972 “Gran Torino” Ford car, which he keeps in mint condition. His next door neighbours are Hmong, whom he regards with suspicion, distrust and contempt, this view coloured by his experiences in the Korean war, for which he was decorated with a medal. Thao (Bee Vang) is the teenager son of the Hmong family who is being harassed by a local gang that his cousin leads. He attempts to steal Walt’s Gran Torino as part of his initiation into the gang, which he grudgingly agrees to as he was coerced and intimidated into joining the gang. Walt nearly kills Thao when he catches him, but slowly a special relationship develops between the two of them and Walt begins to realise that he may have more in common with the Hmong family next door than he does with his own family…

The movie develops into a terrifying climax in which the innocent pay a high price in return for justice and a chance of living the American dream. “Gran Torino” is a patriotic film, but it is gritty and hard-hitting and strikes at the root of the problem that prevents the America of today  from becoming the world leader that it was in earlier times. The United States is a country that was built by migrants. Walt himself is a “polack” and his best friend is a “wop”. He has worked all his life in a Ford factory making cars, and he himself was the one who built his Gran Torino on the conveyor belt. He has had a good wife, had a family, paid his taxes and has built a house, which he maintains in manicured condition. He sees his American Dream crumbling around him and he is willing to do something to fix it, as if it were a crack in the wall or a blown gasket in his car.

This is a great movie! Go out of your way to find it and watch it. Challenging and grim, but nevertheless full of hope and courage.
Posted by Intelliblog at 21:32