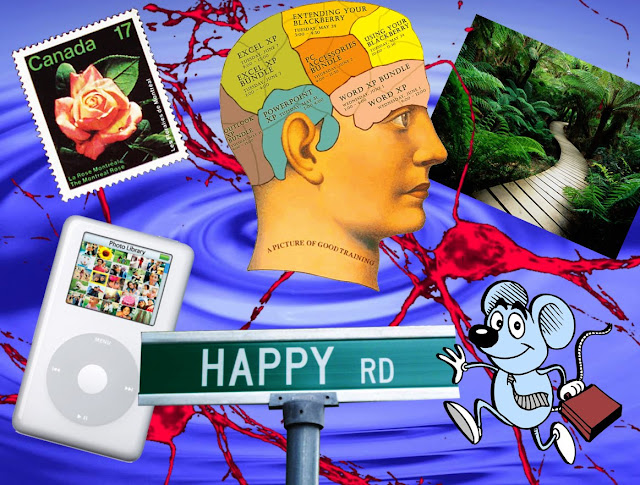 “Man is fond of counting his troubles, but he does not count his joys. If he counted them up as he ought to, he would see that every lot has enough happiness provided for it.” - Fyodor Dostoevsky

Every morning I take the train to work and I usually sit at about the same place in the same carriage, as must do a lot of my fellow travellers, seeing I meet them commuting with me almost every morning. There is one young man who has headphones on and is listening to rather loud music on his iPod (I try and avoid sitting near him), but who also has a mobile phone and constantly plays games on it or sends SMS messages on it. Occassionally he switches to reading a newspaper too. “Ah! Great,” you may say “A multi-tasker! Top marks!”… Well, not quite!

I read an article today (and I wasn’t not listening to my iPod at the time!) that is based on several studies done at Universities in the USA and which maintained that overuse of portable digital devices (phones, ipods, ipads, etc) contributes to brain fatigue and compromises the brain’s ability to remember, think creatively, process information and learn. The main tenet of this study is that if we keep on stimulating our brain non-stop, we lose the precious “down-time” that it needs and in which it processes information, filters out “junk” and creates important interconnections between neurones, which are the basis of long-term memory, creativity and imagination.

University of California San Francisco researcher Loren Frank, researches the brain’s ability to use experience to guide behaviour (i.e. learning). This is one of the most remarkable abilities of the brain. His research has as its goal to understand how activity and plasticity in neural circuits underlie both learning and the ability to use learned information to make decisions. His laboratory focuses on the circuitry of the hippocampus and anatomically related regions of the brain, by recording neurological activity in awake, behaving animals. For example, when rats have a new experience, like exploring an unfamiliar area, their brains show new patterns of activity. But only when the rats take a break from their exploration do they process those patterns in a way that seems to create a persistent memory of the experience. This also applies to human brains.

The ability to multi-task may be good and we may increase our efficiency, however, we should also be rather careful to preserve the precious “down-time” that our brain needs to rest, recover, review, repair and regain its readiness to accept new inputs. I may add quickly, that one may also go to the other extreme, which is also very bad: Under-stimulating the brain is a situation that creates its own set of problems that are equally destructive to the brain;s core functions.

On a related note, those amongst us who take the time to be more aware and appreciate small moments of happiness, laughter and joy each day tend to be happier people overall. Such people are more likely to be resilient against adversity and be more successful in jobs, relationships and also be healthier. Yes, to take time out and smell the roses, appreciating the moment and luxuriating in the present is good for you. The more we dwell on the past, the more we agonise over the future, the unhappier we become and the more we lose our ability to live the moment and take pleasure from the present.

Many people would see both of these conclusions of research studies as common sense and may begrudge the researchers their funds for carrying out research on such “obvious” points. However, the scientist is a curious creature that needs to build foil-proof constructions around simple conjectures and thus verify the soundness of these “obvious” conclusions.

As I mentioned the future before and its connection to happiness (or unhappiness), I should mention something else that I read. It seems that “Vision Boards” are becoming a popular motivational tool that can be used personally or even organisationally. In their simplest form, these are large pieces of cardboard on which one can stick pictures they have cut out of magazines or papers, and which feature desired outcomes, objects of desire or reifications of goals. Motivational coaches use the technique to make people harness the power of the constant stimulation of their object of desire, to help them achieve their goals.

John Assaraf is such a motivational coach who uses such techniques and claims that when he cut out a picture of his dream mansion from a lifestyle magazine and stuck it on his Vision Board, five years later he realised his dream by acquiring the home and living in it. Such coaches invoke the “Law of Attraction”, which in its simplest form says that your feelings and thoughts can attract events that contribute to realisation of your vision and can act in a way that persuades the cosmos to act in your favour… Moonshine? Maybe, but there is evidence that positive thought can influence not only your own actions but also those of people around you.

Some motivational coaches purport that your Vision Board should be as specific as possible, visualizing precisely your goal – for example, the exact model, colour and make of the sports car you want to drive. Other coaches say that simple assembling on your Vision Board any image that has a positive influence and is somehow associated in your mind with your goal is good enough. Both agree that being confronted by the images on Vision Board regularly and for prolonged periods will focus your mind’s energy on achieving the outcome illustrated. Over to you to try…
Posted by Intelliblog at 23:17