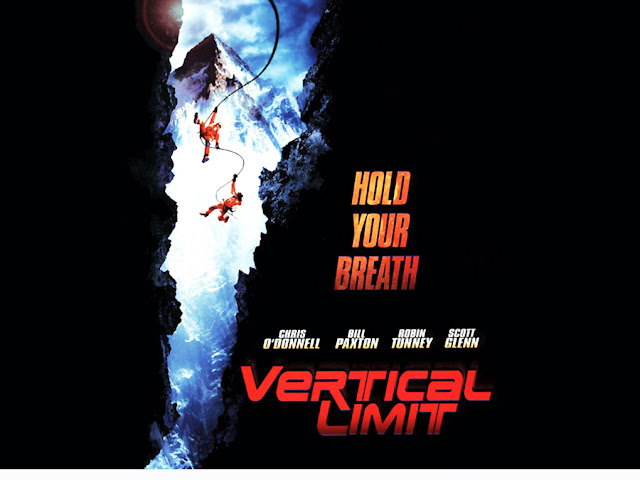 “A raised weight can produce work, but in doing so it must necessarily sink from its height, and, when it has fallen as deep as it can fall, its gravity remains as before, but it can no longer do work.” - Hermann von Helmholtz

We watched a standard Hollywood action movie at the weekend, which although full of action, average performances and a passable story missed the mark on multiple levels. It was the Martin Campbell 2000 film, “Vertical Limit”. The scenario by Robert King was adapted by him from his own novel. Initially, in a seniors’ moment I got him confused with Stephen King, however, I soon realised my mistake. Robert King is more of a TV and screenwriter rather than a novel writer. The film is an action, adventure, thriller with typical spills and thrills à la Hollywood, rather typecast characters, and dialogue that’s mainly limited to “watch out!”, “oh, no hold on!”, “I’LL SAVE YOU, DON’T LET GO!”.

The plot centres on an American climbing/mountaineering-crazy family, the Garretts. The brother and sister have a bad experience rock climbing with their father, resulting in the sister persevering with the climbing and becoming an expert mountaineer, while the brother abandons high places altogether and becoming a successful National Geographic photographer. Several years later they meet up in Pakistan where the sister is preparing to climb K2 (the second tallest mountain peak in the world after Everest), accompanying a billionaire who wants to climb the mountain partly because he’s daredevil mountaineer, but mainly because he wants to use the climb as a publicity stunt for his new airline. Add a few other characters with their own issues and agendas and prepare yourself for lots of rocks and snow, falls and explosions (did I mention that there are canisters of nitroglycerine that need to be carried to the mountain?). It’s like a bit of a cross between the 1998 movie “Cliffhanger” (with Sylvester Stallone, remember that one?) and the classic 1953 “Wages of Fear” (although I am taking Henri-Georges Clouzot’s name in vain here…).

The cast is a bunch of mainly attractive people looking young, healthy and suitably silly for the most part and one thing we immediately remarked upon was: “Aren’t you glad we are no longer young and silly to even think about going and doing stupid things like that?” A comment which had to be somehow recanted when we saw an old codger (played by Scott Glenn) gallivanting about the mountain tops and being the “old expert” who saves the day. Chris O’Donnell and Izabella Scorupco look highly decorative (and yes, they do pair up in the end) but their acting is average, however, good enough for this potboiler. Now that I’ve mentioned potboiler, it’s worth noting that this film opened at #2 at the North American box office, making $15.5 million USD in its opening weekend behind “How the Grinch Stole Christmas”. So, as far as movies go, it was a fairly popular one.

The scenery is quite breath-taking, especially if you watch the movie in bluray as we did. There are some stunning views of Monument Valley, USA, in the opening sequence followed by majestic snow capped mountains as we change location to Pakistan and K2. Some of the filming was done in New Zealand, no surprise, given Campbell is a New Zealander and there is no shortage of snow-capped mountains in his native land.

The verdict? Escapist nonsense, which unfortunately did not have any poignancy or emotional involvement for the viewer. It was formulaic and predictable and one gets tired after a while of people falling off cliffs and explosions. Also some of the feats performed (except being extremely stupid, hazardous, “don’t-try-this-at-home-boys-and-girls” type) are highly unlikely and they demand of the viewer a high level of credulousness and naiveté. Every ten minutes someone is hanging from a cliff as their climbing partner struggles to pull them back up and this is the case in every action sequence in the film. Good enough to watch on a lazy Sunday afternoon, after spending most of the morning in the garden, and just wanting to sit and relax and rest up a little. Catching a nap or two while watching it won’t challenge your brain as it all is very predictable anyway…
Posted by Intelliblog at 22:54