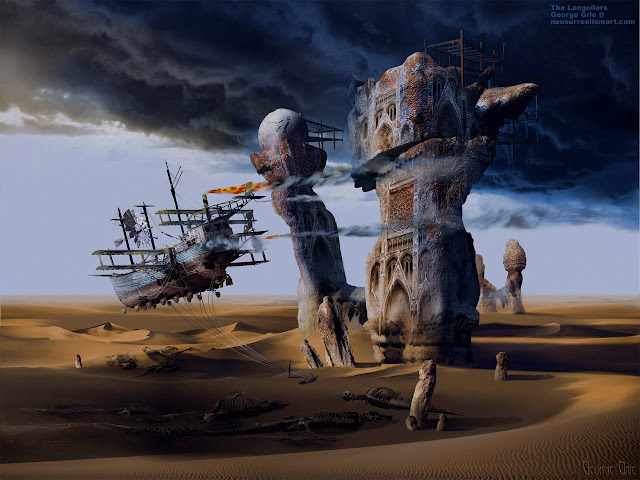 “The single biggest problem in communication is the illusion that it has taken place.” – George Bernard Shaw

According to some sources, today is World Internet Day. We depend on the web for communication, entertainment, ease and efficiency of data transfer, for research, recreation and task convenience. Our daily speech has been peppered with numerous neologisms that relate to web-based activities and services it offers. Nowadays, doing business without the internet is inconceivable. Like any other good invention, the net can be used for criminal activities and there are numerous cases relating to internet crime, stealing of personal data and identity, phishing, scamming, illegal activities of all kinds, racism, exploitation, pornography, etc. Use of the internet has made life easier and more pleasant, but also it has created many monsters that threaten us.

As today is also Art Sunday, I shall introduce to those of my readers who do not know of his work, George Grie (1962- ), an internet artist extraordinaire whose digital, neo-surrealist images can be widely accessed on the net. Grie is a Russian-Canadian artist whose classical art training stood him in good stead when he started his career as a professional fine art painter and graphic artist. His work is influenced by the well-known surrealists Dali, Magritte and neosurrealists Zdzisław Beksiński and Wojciech Siudmak.

Has art has strong visual impact and uses confronting images that engage the viewers, making them try to rationalise and question what they see. There is an underlying unstated philosophisation, inner reflection and sense of wonder in the oxymoronic images he produces. Some of his works are a social commentary on contemporary mores, others are playful imaginings, or even clever illustrations based on word play or extension of symbolic meanings into territory not explored. His palette is limited and the images are often rendered in grisaille with only occasional touches of colour. This suits the fantastical and dream-like visions he produces and contributes to the graphical quality of his work.

The image above is Grie's “The Langoliers or Inevitable Entropy”.  The Artist states the following about this work of his:
“ ‘The ultimate purpose of life is to facilitate entropy. We are the langoliers of the present reality.’ - Kurt Vonnegut

Stephen King's “The Langoliers” Book summary:
When a plane passes through a mysterious time warp, several people find themselves utterly alone when the rest of the passengers and all of the crew vanish. The survivors manage to land, where as they discover that time seems to stand still and that they seem to be the only people left on the planet. To complicate matters, mysterious creatures called Langoliers are chasing them. The Langoliers’ work is to erase moments in time that have already passed into history.

Entropy
The concept of entropy has entered the domain of sociology, generally as a metaphor for chaos, disorder or dissipation of energy, rather than as a direct measure of thermodynamic or information entropy. In the nineteenth century, a well-liked scientific notion suggested that entropy was gradually increasing, and therefore the universe was running down and eventually all motion would cease. When people realized that this would not happen for billions of years, if it happened at all, concern about this notion generally disappeared.

Entropy, historically, has often been associated with the amount of order, disorder, and or chaos in a thermodynamic system. The traditional definition of entropy is that it refers to changes in the status quo of the system and is a measure of "molecular disorder" and the amount of wasted energy in a dynamical energy transformation from one state or form to another.”
George Grie, August 2007
Posted by Intelliblog at 20:38