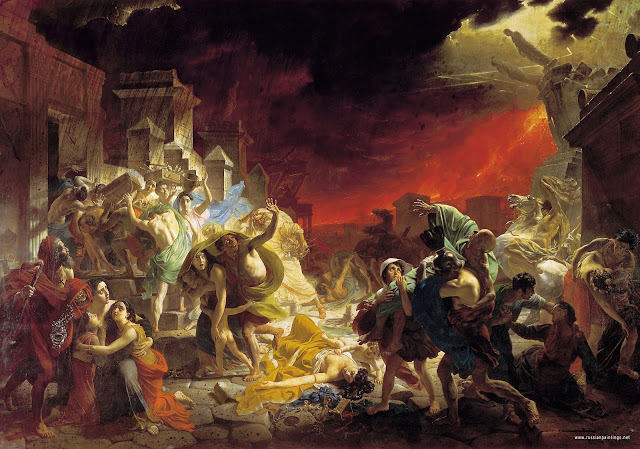 “Noble souls, through dust and heat, rise from disaster and defeat the stronger.” - Henry Wadsworth Longfellow

On this day in 79 AD, Vesuvius erupted and buried the twin towns of Herculaneum and Pompeii, near the Bay of Naples. The luxury-loving Romans of these two towns were accustomed to the periodic earthquakes, rumblings and plumes of smoke from the top of the great Vesuvius volcano. There are records before 79 AD that describe minor eruptions and earthquake damage. Unlike past occasions, on August 24th 79 AD, Vesuvius erupted with dramatic intensity and amazing ferocity, belching forth smoke, lava and ash. The ash storm destroyed the two cities completely, killing thousands who failed to escape in time, killing thousands and burying the two cities beneath mounds of ash and pumice. This colossal volcanic explosion was 100,000 times more powerful than the atomic bomb dropped on Hiroshima.

The Roman writer, Pliny the Younger, was in the region when Vesuvius erupted and fortunately he survived, leaving a full account of that terrible day. Pliny recorded that the ash storm lasted some 18 hours. He writes that Mount Vesuvius shook with a huge earthquake, the mountain’s top split open and a monstrous cloud raced upward, looking like an immense pine tree. The inhabitants of Pompeii were showered with ash, stones, and pumice. A river of hot mud would bury the city of Herculaneum. Reading the letter where Pliny describes the eruption of the volcano, the destruction of the cities and the death of his uncle, Pliny the Elder, makes fascinating but also very poignant reading. It can be accessed here.

Pompeii was buried 3 metres deep, while Herculaneum was buried under 23 metres of ash and mud. The ash preserved and protected these vibrant cities against the elements and plunder, until future archaeologists unearthed this snapshot in time. Only small fractions of the two cities have been excavated, Herculaneum especially being almost all still underground, this being because of the modern city that has been built on top of it. One of the highlights of a trip to Italy is a visit to Pompeii and Herculaneum and the museum of Naples. Until one sees the sites with one’s own eyes and looks at the artifacts recovered is not aware of the amazing finds and the extremely good state of preservation of the buildings and objects of everyday life.

One of the most chilling exhibits is the plaster casts of the bodies of the people that died in the eruption. As the ash covered them and it hardened over the centuries, a cast of their body was left behind. When wet plaster was introduced into the cavity, the shape of the body was captured, revealing its death throes. The outer casing was subsequently removed and one can look at the grim shapes of death centuries old. Both humans and animals have been preserved in this way in various attitudes that suggest an unpleasant death.

Intermittent eruptions since 79 AD were followed by a period of frequent long-term explosive and effusive eruptions beginning in 1631 and lasting until 1944. The 1631 eruption was the largest since 79 AD and produced devastating pyroclastic flows that reached as far as the coast and caused great destruction. Many towns are located on the volcano’s flanks, and today two million people live in the immediate vicinity of Mount Vesuvius, in an area all potentially affected by any future eruption of Vesuvius.

Two excellent novels that are set at the time of the eruption of Vesuvius in 79 AD are the classic “The Last Days of Pompeii” by Baron Edward Bulwer-Lytton in 1834. This was a very popular novel in its time and once very widely read. It is now neglected, probably because of its “old-fashioned” flavour. I read it first when quite young and then re-read it with pleasure a few years ago, after I had visited Pompeii. The second is the more recent (2003) “Pompeii”, by Robert Harris, which is a retelling of the fateful Mt. Vesuvius eruption from the perspective of an ancient aqueduct engineer. It is a well-researched modern thriller set in August A.D. 79 in Campania, where Pompeii is located. Robert Harris tells the story of corruption, politics, love, Roman superstition, slavery, and engineering, all set against the power of Mt. Vesuvius, mixing fictional with historical characters.