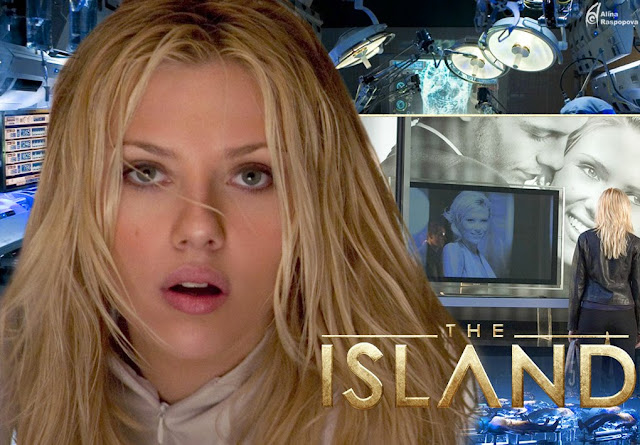 “God never made his work for man to mend.” - John Dryden

Sometimes you start watching a movie and believe it will be exactly like what the sleeve notes make it out to be, but once you keep on watching you can be surprised - pleasantly or unpleasantly. We watched a film at the weekend and it was a pleasant surprise we had, as we expected it to be a typical action thriller, but this one had a little bit of a twist to it and it tackled some interesting ethical issues also. The film was the 2005 Michael Bay dystopian fantasy “The Island”.

Lincoln Six-Echo (Ewan McGregor) and Jordan Two Delta (Scarlett Johansseon) are residents of a dystopian, contained and carefully controlled facility (the “dome”) in the year 2019. They are imprisoned in a sterile and crowded, totalitarian society, protected from a massive contamination that has rendered the rest of the planet uninhabitable. All but a paradisiacal island where some lucky chosen few dome residents are drawn by lot to be relocated to. Like all his peers, Lincoln hopes to win the lottery and go to the “The Island”. Lincoln begins to investigate his environment and through his friendship with one of the technical support people of the “dome” he discovers that all is not as it seems. Jordan wins the lottery but Lincoln convinces her that the island is a hell not a paradise and together Lincoln and Jordan make a daring escape. They are relentlessly pursued by the security forces of the “dome” that once housed them and the two escapees take part in a race for their lives to literally meet their makers.

Although the film is a an action thriller and a science fiction fantasy, its basic theme is familiar enough and disturbingly realistic in the present time where advances in biotechnology underline the possibility of the chilling plot of the film. The film raises enough issues to be a good choice for much discussion in a bioethics class. What makes us human? How much do we value life? What does it mean to be an individual? How far can we go with biotechnology? Is human embryo research justified? To what length are we prepared to go to save the life of a loved one? To save our own life? What is the ‘God Complex’?

There are multiple underlying philosophical, moral and ethical questions posed by the film, but it still can be enjoyed as a mindless action thrills-and-spills dick-flick. Let me rephrase that: The film can be enjoyed at various levels and different viewers will relate to the film at different depths. We started watching it and believed it would be a fantasy/science fiction action movie, but after we finished watching it we launched into a heated debate about the ethical questions I mentioned above. Others may not.

The two leads are likeable enough and do a good job with their characters and the way that these develop through the film. The sets and special effects are well done and the action sequences well orchestrated. Sure enough there some little holes in the script and there is an element of the “unexplained” in some parts of the film, however, overall it was an enjoyable film and one which could make one think and question and debate. I’ve tried to not give away much of the plot just in case you wish to view it yourself.
Posted by Intelliblog at 01:16