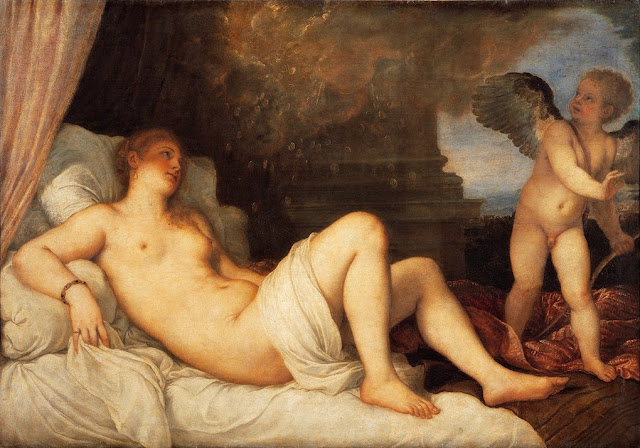 “It is because Humanity has never known where it was going that it has been able to find its way.” – Oscar Wilde

Mythological painting re-entered Western art with the revival of ancient Greek and Roman myths that took place in the Renaissance. Artists suddenly found themselves amongst a treasure trove of new subjects, which kept them busy from the 15th to the 19th centuries. The illustrations of these mythological subjects provided an opportunity for depicting archetypes and situations that could be adapted to particular requirements and satisfy art patrons in a variety of ways. At the same time, the themes demanded a certain adventurous style and an experimentation that led to the great revolutions of artistic expression seen through art history.

The intellectual and social conditions that enabled classical mythology to become such a vital force in European art for about 300 years drastically changed in the early 19th century with widespread industrialism and urbanisation and the rise of the middle classes. Today, the world of classical Greek and Roman deities, heroes and historical personages is one which the person in the street has only a vague familiarity with. The illustration of allegories and complex symbolic principles, imaginative personifications of forces of nature and forgotten myths seems to be even more alien to modern sensibilities than it was in the 19th century. I can hardly imagine Paris Hilton contemplating Boticelli’s “Calumny of Apelles” and immediately being aware of the allegoric significance of the figures illustrated. Most people would view Rubens’ “Judgment of Paris” and all they would register would be three corpulent women baring all in front of a young man.

Western painting developed under the sponsorship of the Church, its purpose to illustrate the stories of the New Testament. But by the midpoint of the Italian Renaissance (about 1482) artists began to turn to painting the things which Christianity had kept secret, above all the legends and stories of the pagan world. Botticelli’s “Primavera” was the first great anti-Christian painting in Western art.

The stories of the Olympian gods, their loves and adventures were invented by the ancient Greeks. The Greeks also invented philosophy and science, so why did such a logical and sensible people cling to their improbable myths? Maybe it was because the myths explained better than science what it meant to be a human being… Homer, Hesiod, and later the Romans Virgil and Ovid (who appropriated the Greek gods), told the mythical stories in marvellous poems which still move readers. A myth is a story that serves a purpose: To explain the origins of something, to justify something, or to serve as a warning or an example or a symbol. Such a story is usually easy to understand, involving strong and simple emotions and clear and basic relationships. But myths illustrate special stories, not just any story. The great myths illustrate and explain to each generation something about the order of the world and the relationships between gods and humans. They also serve as the examples of human excellence.

As Christianity established itself as the state religion of Rome (both in West and East) in the 4th century AD, belief in the existence of the Greek gods was lost. Christian and Barbarian forces destroyed most of the visible great art depicting these gods. For almost a thousand years the stories of the pagan gods were banished from the public mind. It was during the Renaissance that patrons like the Medici and their circle of humanist scholars began to rediscover the legacy of Greece and Rome.

Many ancient writings about the gods survived, especially the books of Homer, Hesiod, Virgil and Ovid, almost no original Greek sculpture or any Greek painting (with the exception of vase painting) was there to be seen, hence no readily available visual evidence of these gods. Venus’s portrait waited for a thousand years for Botticelli to paint again.  The “Birth of Venus” shows Venus’s nude body in all its tantalizing innocence. Nevertheless forbidden territory for a painter at the time. Venus was reborn in Italy and sent shockwaves throughout aristocratic Europe.

Mythology thus became a justification for Renaissance and Post-Renaissance artists to paint with a new freedom and boldness denied them by Christianity. The explicit moral commandments of Christianity, above all, humility meant that important human emotions and attitudes could hardly be glorified in properly Christian terms. Since Europe had by no means renounced the values of pagan nobility - honour, pride, vengeance, self-assertion, magnanimity - these values found a haven in the representation of classical antiquity. Humanism celebrated human values and concerns. The ancient gods with all of their human attributes and failings stressed the potential value and goodness of human beings, emphasising common human needs, and allowed humans to seek solely rational ways of solving human problems. This revival of Greek and Roman learning was seen as complementing rather than conflicting with religion and it was allowed to flourish by the Roman popes, as they themselves were products of the aristocracy and nobility that engendered the humanist Renaissance.

The painting above is Titian’s “Danaë” hanging in Museo di Capodimonte of Naples. This work, was begun in Venice in 1544 and completed in Rome in 1545-46 for Cardinal Alessandro Farnese. It enjoyed great success, even if Michelangelo lamented the fact that the composition was based on color rather than line (disegno) when he saw it; he admired the manner and color and acknowledged Titian's skill for copying life (controffare il vivo). The legend illustrates one of Zeus’s illicit love affairs with Danaë. She was the daughter of Acrisius, king of Argos. An oracle foretold that she would bear a son who would kill her father. Attempting to evade this, Acrisius imprisoned her, but Zeus visited her in the form of a shower of gold and she conceived Perseus, who killed Acrisius by accident.

Titian provided his patron, Cardinal Farnese with a legitimate excuse for contemplating a female nude form. It was an illustration of the inevitability of fate and the submission to divine will, while at the same time allowing the exposure of the beauties of a nubile young woman for the enjoyment of the Cardinal…
Posted by Intelliblog at 01:40