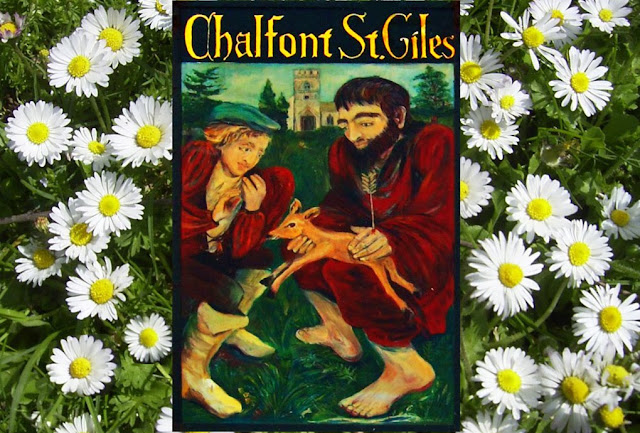 It is the first day of Spring in the Southern Hemisphere today and we have had a gray, cool and rainy day today. Not that I have had much of a chance to go out, but perhaps it was just as well. It has been a very busy day with much to do and a couple of deadlines to adhere to. Fortunately, all went well and the documents were al ready to go at the appropriate time by close of business…

It is St Giles' day today, and he was a 7th century hermit living in Provence.  He loved wild animals and on one occasion he saved a hind, which was pursued by hunters by causing thick bushes to spring around it and conceal it. His protecting hands around he hind save it from a huneter’s arrow, but the saint’s hand was pierced instead. The hind is his symbol and he is the patron saint of cripples, beggars and hermits.

Many fairs were held on this day in England.  St Giles’s fair in Oxford is one of the oldest surviving British fairs.  Eccles Wake in Lancashire is another one, celebrated around the Parish church dating from 1111 AD, although most of the modern building is from the 15th century.  This is where Eccles Cakes were first made about 300 years ago.  Eccles Cakes may be bought in many bakeries and pastrycooks’ shops in Britain but the original recipe is a prized secret of Messrs Bradburn & Co, a family firm in Lancashire’s Eccles Borough.

Eccles cakes are made from a rich butter puff pastry and are round, about 3 inches (≈ 7.5 cm) in diameter.  They are filled with currants, butter and sugar that are wrapped in the pastry.  The cake is rolled twice, dusted with sugar and three light diagonal cuts are made over its surface.  The cakes are baked, sugar-side up, in a very hot oven for 15 minutes.  They are served cold.  Closely related to Eccles Cakes are Coventry Godshead, Chorley and Hawkshead Cakes.

It is the first day of Autumn in the Northern Hemisphere and the first day of the church calendar in the Greek Orthodox faith, known as Indictus, from the Latin “indictio” (a fiscal period of fifteen years used as a means of dating events and transactions in the Roman Empire and in the papal and some royal courts. The system was instituted by the Emperor Constantine in AD 313 and was used until the 16th century in some places).

For today, a Spring poem:

The sun, with his great eye,
Sees not so much as I;
And the moon, all silver, proud,
Might as well be in a cloud.

And O the spring – the spring!
I lead the life of a king!
Couched in the teeming grass,
I spy each pretty lass.