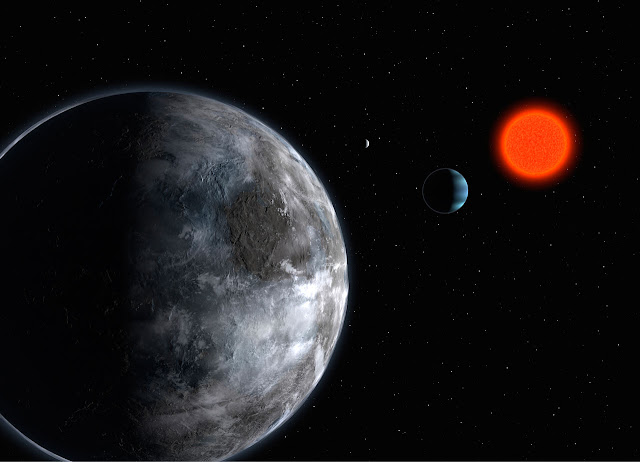 “The sun, the moon and the stars would have disappeared long ago... had they happened to be within the reach of predatory human hands.” - Havelock Ellis

Imagine yourself and your family entering a huge interstellar spaceship. You are joining another few hundred families and a few hundred crew members that will start a journey across trillions of kilometers of space and which will last a few generations. Your spaceship is a self-contained small world that will sustain and nourish not only its original passengers, but their children and grandchildren, their grandchildren, and so on. If all goes well, this starship colony will have travelled for nearly 200 trillion kilometers in a journey that has lasted for hundreds of years into deep interstellar space, aiming for a distant small red sun the constellation of Libra…

Your descendants on the spaceship will finally be able to gaze out of their portholes and see the distant sun their ship was aimed at for so long… It is the sun Gliese 581, a red dwarf star, around which there are six planets orbiting. The destination of this interstellar expedition is Gliese 581g, an earth-like planet, orbiting in the habitable zone of this sun. On this world there is liquid water and there are habitable regions in which life may be possible. “May be possible” being the operative words.

The planet is “tidally locked” to Gliese 581, which means it does not rotate; the side facing the sun would be perpetually hot, and the side turned away, perpetually cold. However, the twilight zone between light and shadow would be fit for human life. This is the zone that our starship has been directed at, to begin a new colony of humanity. This is of course assuming that everything else on the planet is right, including the gravity, the atmosphere, lack of indigenous hostile life-forms, etc etc… All of this of course would have been checked before the starship began its journey. And even if everything was deemed to be OK before the trip started a “second option” planet in the neighbourhood would have been selected.

Does all of this sound a bit like a sci-fi fantasy story? Well, I agree maybe yes, but part of it is all true. The planet Gliese 581g does exist and has just been discovered. This planet is not alone in the astronomers’ list of possible planets that can or do harbour life. Various calculations based on data that has been collected over the years and complex formulas, have resulted in the assertion that as many as one in 5 stars in the universe is orbited by a planet that can sustain life. This means that of the 200 billion stars in the universe, maybe 40 billion planets have the potential for life.

If you go out and gaze into the sky right in the midst of the constellation of Libra, you will not be able to see Gliese 581 with the naked eye, you will need a telescope, as Gliese 581 is about one third as bright as our sun. However, the descendants of the starship passengers that establish a colony on Gliese 581g will be able to gaze into the sky and see with the naked eye a bright star in the firmament which they will know is the sun of the world on which their ancestors evolved!

All of this may be in the future, of course, but we are ruining our earth in such a precipitously rapid rate that we may need to go scrounging around the galactic neighbourhood in order to find other planets that we can colonise and start ruining afresh.
Posted by Intelliblog at 23:01