BOLDINI AND A MYSTERIOUS APARTMENT 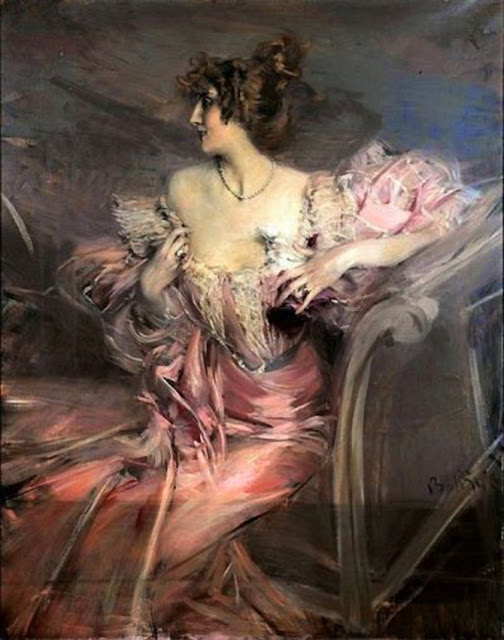 “Those who dwell among the beauties and mysteries of the earth are never alone or weary of life.”  - – Rachel Carson
Just recently, a good friend of mine sent me an email which contained this link to an interesting news story about a Parisian apartment that was locked up for 70 years and has only now been opened up to reveal a veritable time capsule from the turn of the century. The apartment is situated near the Trinité church, between the Pigalle red light district and Opera. It was locked and uninhabited but wasn’t abandoned nor empty, as someone was paying for its rent. It was filled with furniture, books and various works of art.
The most remarkable painting in the apartment was that of a woman in a pink muslin evening dress. The woman was Marthe de Florian, and the painting was by Giovanni Boldini. This was confirmed by a written love note from the painter to de Florian. The apartment belonged to Marthe de Florian’s granddaughter who left for the south of France before World War II and never returned. She had just died recently at age 91, and legal experts who have been tasked to draw up an inventory of her possessions in the apartmnent made the amazing discovery.
The people charge with making an inventory of the contents of the apartment, had  speculated that the paintng was the work of Boldini, but there was no record of the painting. According to Marc Ottavi, an art specialist, “No reference book dedicated to Boldini mentioned the tableau, which was never exhibited.” When the visiting card with a scribbled love note from Boldini to Marthe was found in the apartment, the suspicion was confirmed. Later a reference to the painting was found in a book by Boldini’s widow, which said it was painted in 1898 when Miss de Florian was 24.
The painting was sold at auction and bids opened at €300,000. The bidding became feverish and the process offered rapidly shot up as 10 bidders rivalled to own the now famous artwork. The winning bid was €2.1 million or $3 million. “It was a magic moment. One could see that the buyer loved the painting; he paid the price of passion.” Mr Ottavi said.
Giovanni Boldini enjoyed a long and successful artistic career (1842 - 1931). Born in Ferrara, Italy in 1842 and trained on the Italian Renaissance masters from childhood with his religious artist-father, Antonio Boldini. He also studied under other accomplished artists, gaining a reputation even at that young age as an accomplished portrait painter. He then studied in Florence at the age of 20, at the Scuola del Nudo (the School of Nudes), a subject he would return to only in old age.
Giovanni combined work and study for many years, training in Paris and London, and Holland and Germany. He moved to Paris but continued travelling for his work. He developed his own, distinct style, and his portraits grew in fame, helped greatly by a portrait commissioned by Giuseppe Verdi in 1886, the biggest celebrity of his day.
The discovery of this new work under such amazing circumstances is a surprise and a fortuitous turn of affairs. It goes to show that who knows how many masterpieces may be so near to us and we do not even suspect it…
Posted by Intelliblog at 01:02