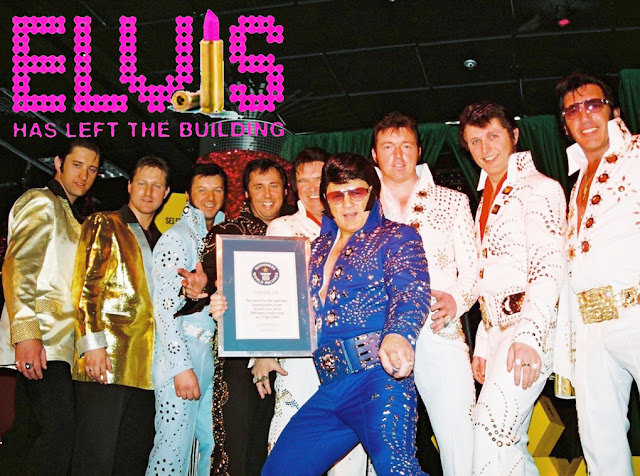 “Why should people go out and pay money to see bad films when they can stay home and see bad television for nothing?” - Samuel Goldwyn

We watched a rather ordinary movie at the weekend. It was Joel Zwick’s 2004 “Elvis Has Left the Building” with John Corbett and Kim Basinger. Zwick has been responsible for the 2002 “My Big Fat Greek Wedding” in which Corbett starred again. This director seems to have a slew of other comedy/romantic comedy movies and TV series in his credits. He handles this genre fairly competently, but there is no innovation or surprises in what turns out to be standard Hollywood grist. The entertainment version of junk food…

The plot is fairly thin and the gimmick is the killing of several Elvis impersonators throughout the film. Basinger plays a Pink Lady make up travelling saleswoman who has the habit of being at the wrong place at the wrong time and managing to get involved with the Elvis impersonator deaths – accidental or otherwise… She manages to hook up with an advertising executive (Corbett) who seem to be running across dead Elvises all over the place as well. You guessed it, it’s a match made in Las Vegas…

The film is pleasant enough to have on in the background while you’re ironing or something like that, but I wouldn’t recommend it for dedicated viewing. The laughs are few and far between and they are more likely to be smiles or half-chuckles in any case. Corbett and Basinger do a decent enough job of what little the script has to offer them and the direction is pedestrian. The Elvis impersonators in most cases deserve what they get and the two detectives on the case are at best annoying or tiresome.

I guess there aren’t that many redeeming features in the film, but if anyone has seen it and has a different opinion, please comment.
Posted by Intelliblog at 14:06