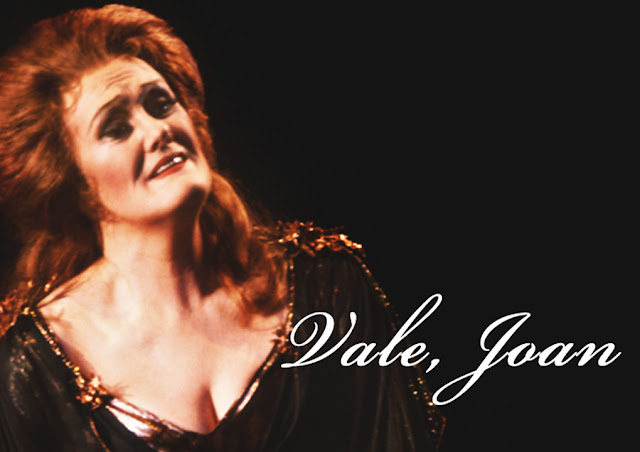 “For death is no more than a turning of us over from time to eternity.” - William Penn

News this morning of the death Joan Sutherland, “La Stupenda” of the world operatic stage, surprised and saddened me. She was one of the great stars of opera and I had seen her performing live, which made me understand the sobriquet attached to her persona. At 83 years of age, one had to expect that death would soon be calling at her door, but one has in one’s mind a strong image of such immensely great personalities that they seem to be immortal, unable to succumb to the ravages of age, disease, death…

Her death in Switzerland was a shock to my system as the way that I remember her was as that vivacious, larger than life figure, singing on stage looking majestic, commanding, beautiful and ageless. She was born in Australia and shot to international fame in 1959 when she assumed the title role in The Royal Opera’s new staging of Donizetti’s Lucia di Lammermoor at Covent Garden. From then on she was unrivalled in the bel canto repertoire and continued the revival of interest in the operas by Bellini and Donizetti that had been pioneered at the start of the 50s by Maria Callas. She went on to conquer all the major opera houses of the world, including the notoriously difficult audience at la Fenice, Venice who, after her appearances as Alcina, named her ‘La Stupenda’ (the stunning one).

She possessed a clear, agile, powerful voice and a flawless technique with a great vocal range. This is the reason she excelled in the exacting and demanding roles written for the soprano voice by Donizetti, Bellini and Verdi. She bid farewell to the stage in 1990 in the role of Marguerite in Meyerbeer’s Les Huguenots with Opera Australia in Sydney and appeared alongside two of her regular on-stage colleagues, Luciano Pavarotti and Marilyn Horne as party guests in the Royal Opera’s staging of Die Fledermaus the same year.

Joan Sutherland had been suffering ill health for some time and died in her home surrounded by the people closest to her, gazing out on the Swiss landscape, in a town near Montreux. Her husband, conductor Richard Bonynge, and their son Adam survive her.

Requiescat in pace, Dame Joan Alston Sutherland, OM, AC, DBE (7 November 1926 - 11 October 2010). The operatic firmament has been robbed of one of its brightest shining stars.


Here she is immortalized by technology for our perpetual enjoyment, singing “Casta Diva” from Norma by Bellini.  The Elizabethan Symphony Orchestra is conducted by Richard Bonynge at the Sydney Opera House.