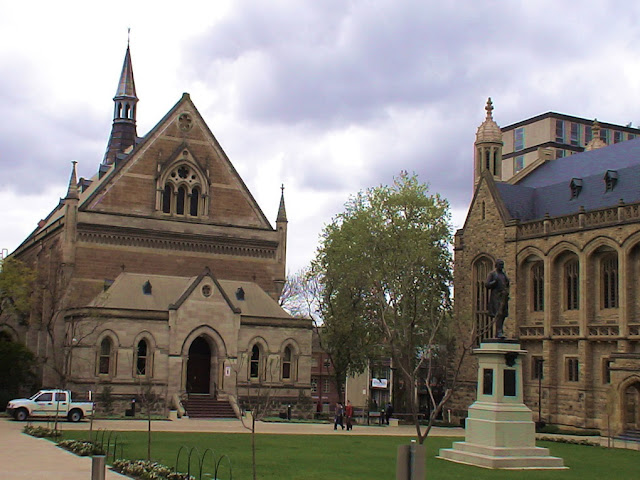 
I am in Adelaide for the day today and unusually for Adelaide, the day was rather dull and gray, with the temperatures low in keeping with the season. I say unusually, as Adelaide generally has warmer weather than Melbourne and more often than not one can expect a sunny day here. At least it did not rain and I was able to go everywhere I needed to by walking. Adelaide City is a very pleasant one to walk in and as well as going to our College Campus here I also visited the TAFE SA campus and the UniSA campus. It ended up being a very hectic day, but at least many things got done. It does make for a long working day, however, when one leaves home at the crack of dawn and doesn’t get back until well into the night.

One of the things I had on my agenda today was to have a meeting with students who had some issues with the way the College processes operate. I always like to talk to students directly as someone in my position rarely gets a chance to do this under normal circumstances and I tend to get shielded from such contact by various academic and administrative layers. Information can be distorted as it passes through these layers and sometimes I am unaware of some important issues, or they are reported to me second and third hand, which can give me an inaccurate perception of them. Talking to students directly gives me an accurate idea of what the student experience is like and I can then investigate the issues they divulge in a more informed manner.

I think politicians, CEOs, directors and other executives should always strive to listen to the voices of the people they serve, lead or represent, and if possible do it in a manner that is the least intrusive possible (maybe incognito?). That way they will get an idea of what is really going on and they will be able to understand what is happening at the grass roots level in an unfiltered and undistorted manner. One would have to ensure that the sample was an unbiased and representative one, but many small samples is another way of getting to appreciate the truth of the matters at hand.

My meeting with the students today made me see certain matters in a new light and I took out of that meeting several action items. Tomorrow I shall be able to confront some members of my staff with some apt questions that will certainly highlight a few deficiencies in our system. Acting on the information that I gathered today will be a very delicate matter. One has to be informed, certainly, but one must also allow any party involved the right of reply and justification. We all know that after one hears both sides of an argument, the truth must lie somewhere in between…

The other interesting thing that happened today, was an information session that I attended regarding the changes that are happening in tertiary educational regulation and quality assurance in Australia. Legislation has been introduced into Parliament, which will allow the creation of a single national authority that will take over all such regulatory and quality assurance activities in Australia from January 1, 2012.

The new body is TEQSA (Tertiary Education Quality and Standards Agency), which will take over from AUQA, various Offices of Higher Education that are state-based, and will also assume the responsibility of overseeing the education of international students in Australia. This new system promises to be a unified and unitary system that will have greater power to intervene and enforce compliance, combining regulatory and quality improvement activities.

It will simplify much of the bureaucracy that now rules several related areas in regulatory and legislative compliance and will increase the efficiency of all processes relating to oversight of tertiary education in Australia. It is something that was triggered by the 2008 review of Tertiary Education in Australia carried out by Denise Bradley. I am personally overjoyed at this turn of events as it will reduce the cost of our regulatory compliance, decrease the time we need to accredit and approve our degree programs, but also increase the overall efficiency of all of our compliance-related activities.
Posted by Intelliblog at 21:34