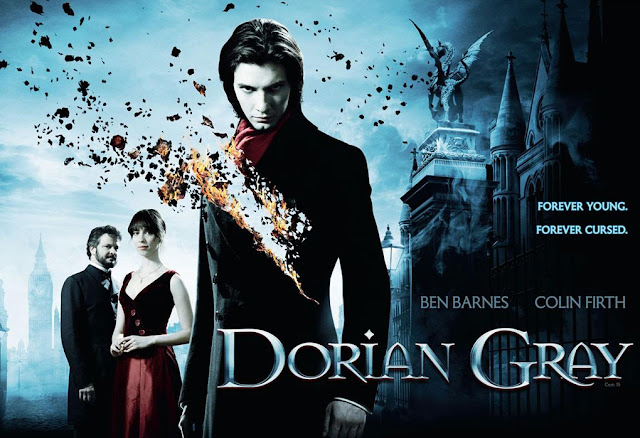 “Every portrait that is painted with feeling is a portrait of the artist, not of the sitter.” - Oscar Wilde

At the weekend we saw the 2009 Oliver Parker film “Dorian Gray”. It is based on Oscar Wilde’s only novel, “The Picture of Dorian Gray”, first published in 1890 in Lippincott’s Magazine. The plot concerns a handsome young man, Dorian Gray, who becomes the subject of a painting by artist Basil Hallward. Basil is infatuated by Dorian’s beauty and believes that this portrait and Dorian’s beauty is responsible for a new phase in his art. Lord Henry Wotton, a friend of Basil meets Dorian and the young man finds a surrogate father figure in Lord Wotton. Unfortunately, Lord Wotton is a hedonistic roué who suggests to Dorian that the only things worth pursuing in life are beauty and fulfilment of the senses. Dorian realises that his beauty is ephemeral and he half-jokingly expresses a desire to sell his soul to ensure the portrait Basil has painted would age rather than himself. Dorian’s wish is fulfilled, and he plunges into debauchery and heinous crimes. The portrait serves as a reminder of the effect each act has upon his soul, with each sin displayed as a disfigurement of his form, or through a sign of aging.

The novel of course is powerful and allegorical, it is full of Wilde’s wit and beauty and holds a worthy place amongst the great literary works. It is a gothic horror story but nevertheless, full of philosophical questions, explorations of the human condition and the nature of the soul. The film follows the novel, but is an adaptation and introduces some variants, stresses some parts (the bawdy bits) and glosses over some other more important ones (the philosophical and emotional bits), which is an attempt to make the film more marketable and appealing to the 21st century audience with the jaded palate. It is inevitable that any novel adapted for film will be changed and reinvented for the new medium, however, a good adaptation preserves the spirit of the novel, rather than magnifying the sensationalist parts and ignoring the essence.

In terms of the actors, Ben Barnes as Dorian Gray was miscast, in my opinion, as he is not striking handsome nor “beautiful” in the way that Basil sees him. His acting is poor and he simpers throughout most of the role and once cannot garner enough emotion to love him or hate him. He inspires boredom more than anything else. Colin Firth as the hedonistic dandy Lord Wotton is a better choice, although his part is rather static (at least for the first three quarters of the film) and his lines predictable. Ben Chaplin does a good job of tackling a bit of a pastiche of the role of Basil as there is not much time nor character development meted out to him in the film. Rachel Hurd-Wood as Sybil Vane looks delightful and plays her small part beautifully.

The scenery, costumes and cinematography are well done, however, the special effects are more worthy of a B-grade horror film. The music was not memorable, therefore unobtrusive and adequate. The direction a trifle pedestrian, and the emphasis placed on Dorian’s licentious sexual escapades in the bedroom overly long. Not much is done to explore Dorian’s fascination with murder, drugs and his relationship with Lord Wotton. As was mentioned above, this is an eminently marketable film, and as it aiming towards the masse of illiterate crowds, it did the best it could.
Posted by Intelliblog at 00:54