THE IDES OF MARCH AND FALSE FRIENDS 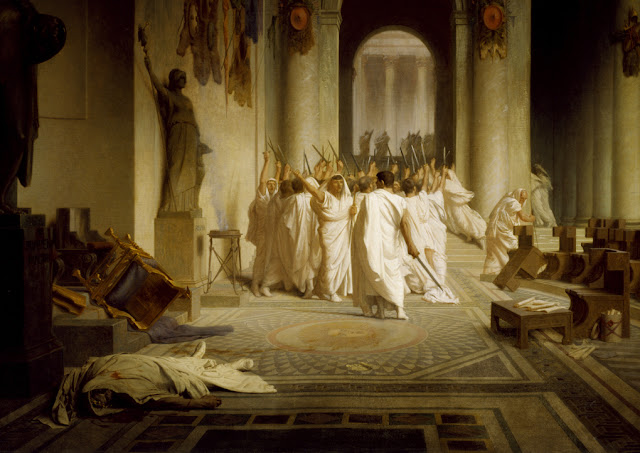 “An open enemy is better than a false friend” -  Greek proverb

On this day, the ides of March, in 44 BC Julius Caesar was assassinated. According to second century historian Plutarch, Caesar was warned to beware the Ides of March by a soothsayer while his wife Calpurnia also insisted that he not venture out on that day as she had dreamed that he would be killed.  Caesar dismissed them both and went to the senate as he had planned. When entering the senate building he saw the soothsayer and greeted him ironically with the words: “The Ides of March be come…” upon which the soothsayer replied softly: “…but yet they are not yet past!”  Moments later Caesar lay dead on the floor of the senate, murdered by his colleagues and “friends”.

Amongst the 16 conspirators wielding daggers was his good friend Brutus. Caesar seeing Brutus attacking him, is said to have uttered: “Et tu, Brute…” meaning, “You too, my friend, Brutus?” However, this may not have been what Caesar actually uttered. Some other authors claim that Caesar in fact said, in Greek (which he as other noble Romans spoke fluently): “Kαὶ σὺ, τέκνον…” translated as “You too, my son…” While both of these phrases are taken as evidence of Caesar’s recognition of utter betrayal, the Greek words may have a more sinister meaning. A proverbial Greek phrase common amongst Romans at the time began in this way, and translated was: “You too, my son, will have a taste of power…” Caesar was thus pointing out to Brutus that his turn too would come when he was powerful to be betrayed in a similar way. His last words therefore rather than expressing bitter despondency at the betrayal of his friend, may be interpreted as a threat or a curse…

Betrayal is hard to stomach, especially if it comes from someone that we are close to. Its normally bitter taste becomes a hundred times more unpleasant in that case and we find it hard to contain our misery and distress. False friends are indeed more pernicious and destructive than open enemies. Their actions bring to us great heartbreak. Our feelings of misplaced trust and our lost faith in our friend adds insult to our injury.

Japan has placed its trust in an old enemy that has been masquerading as a friend. Nuclear power wrought the shocking destruction in Nagasaki and Hiroshima in 1945 when the atom bombs were dropped by the Americans in a desperate and horrific act that ended the war. It is this same old enemy of nuclear power that was befriended by the Japanese and their trust was placed in this false friend fuelling the nuclear reactors that supplied their country with electricity – cheap, efficient, non-polluting power…

In the wake of the quake and tsunami, damage to the nuclear reactors has caused consternation as radiation leaks and a potential meltdown have alerted the world to the possibility of a nuclear disaster bigger than Chernobyl. Dangerous levels of radiation leaking from the crippled nuclear plant has now forced Japan to order 140,000 people to seal themselves indoors after the explosions and fire in the power stations dramatically escalated the crisis at the Fukushima Dai-ichi plant. The old scars on the psyche of the Japanese people have been scratched and the threat of another contamination with its concomitant misfortunes have awakened painful memories of Hiroshima, Nagasaki, the Hibakusha (survivors of the nuclear blasts) and the nation’s terrible aftermath in the wake of the atom bomb blasts.

Anti-nuclear demonstrations have begun in earnest worldwide, as our fragile planet is once again threatened by our inane activities. It is surprising that a sentient species such us continues to repeat mistakes of the past, continues to play with the fire that has burnt us deeply previously, and we fail to learn from our past experiences. We continue to strike up friendships with pernicious and covert enemies and we act surprised when such false friends are revealed for what they are.
Posted by Intelliblog at 00:30