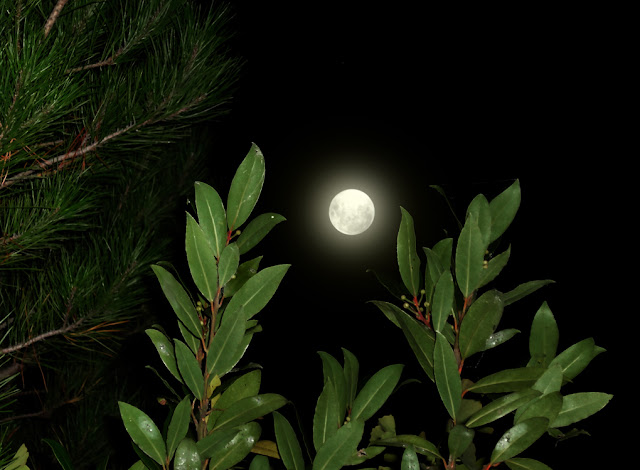 “Moon! Moon! I am prone before you. Pity me, and drench me in loneliness.” – Amy Lowell

The biggest full moon in 19 years is with us tonight and the rags have already dubbed it “supermoon”. This Saturday, the moon will arrive at its closest point to the Earth in 2011: a distance of 356,575 kilometers away. The moon has not been in a position to appear this large since March 1993. At its peak, the “supermoon” of March may appear 14 percent larger and 30 percent brighter than lesser full moons (when the moon is at its farthest from Earth). Yet to the casual observer, it may be hard to tell the difference. The variation of the moon’s distance is not readily apparent to observers viewing the moon directly.

Unless the moon lies close to the horizon, when it can appear absolutely enormous. That is when the famous “moon illusion” combines with reality to produce a truly stunning view. For reasons not fully understood by astronomers or psychologists, a low-hanging moon looks incredibly large when hovering near trees, buildings and other foreground objects. The fact that the moon will be much closer than usual this weekend will only serve to amplify this strange effect.

Driving back home tonight, I saw the moon up in the clear sky and yes, it looked stunningly beautiful but not much larger than usual. Obviously I did not catch it early enough when it was close to the horizon.

The “supermoon” will not cause natural disasters such as the Japan earthquake, a NASA scientist has stressed…

For Song Saturday, something apt: A piece from Karl Jenkins’ suite “Imagined Oceans”, which set in music lunar landscapes, and more specifically the names of the imagined oceans on the moon;s surface. Here is his Mare Serenitatis – “Sea of Serenity”.