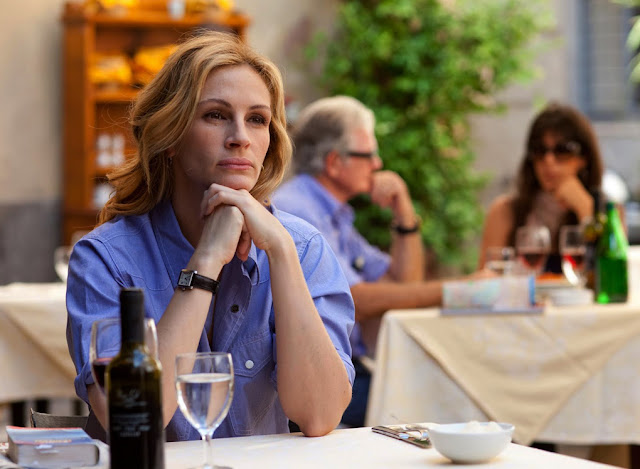 It was a public holiday in Melbourne today, Labour Day. The day was sunny and fine and we started it by taking a long walk to the Darebin Parklands. It seems that many other people had the same idea as us, with the place was full of families, cyclists, children and adults, people walking dogs and many others like us. Yesterday it had rained fairly heavily and the creek was full of water, the rushing water flowing rapidly and carrying now and then debris. Twigs, broken branches. On the banks there some uprooted saplings and one could see on the banks that yesterday the water level was much higher.

We came back home rather tired and seeing how I still haven’t recovered from my cold, we sat down and watched a movie. We saw the Ryan Murphy 2010 film “Eat Pray Love”, the screen adaptation of Elizabeth Gilbert’s best seller. We had got this film yesterday at the Latrobe University Sunday market and seeing how we had heard so much about it, we decided to watch it today. It was really quite disappointing…

First, let me say that we haven’t read the book and most of the good things I have heard concern the book. Yes, yes, I know, don’t judge a book by its film, but this is a book I have now not been inspired to read. However good the book is, the film has ruined it pre-emptively for me. This was a movie that went on and on for two-and-a-half hours and the only relief was the scenery in Italy, in India and in Bali. But it was no travel documentary, but a “deep-and-meaningful voyage of self-discovery by a woman who is going through a mid-life crisis”. Yawn… Wake me up when it’s over, please.

Julia Roberts plays Liz Gilbert who has achieved success as an author, has a husband, friends, a house, a career she likes, and lives the good life in New York. Yet like so many others in her shoes (those who have not experienced real misfortune, or need, or poverty, or deep tragedy), she finds herself lost, confused, and unsatisfied with all the wonderful things that life has offered her. She decides to start searching for what she really wants in life. She gets a divorce (and presumably with quite a lot of cash in hand), embarks on a journey around the world that becomes a quest for self-discovery. In her travels, she discovers eating in Italy; praying in India, and, finally loving in Bali. Her character comes out as selfish, ungrateful and mawkish in a self-pitying sort of way. She whines a lot…

The travels of Liz are inward-looking and her whole wide-world is an insulated water-coloured one untouched by economic crises, wars, terrorism, natural disasters, poverty, uncertainty, climate change, religious intolerance, or any other major issues of philosophical importance. The world inhabited by Liz is Lizocentric and everything revolves around her paying homage to her shallow existence and short-sighted view of the narrowest perspective.

She visits Italy and her Italy is a caricature of some 50s and 60s films of the type “Gidget Goes to Rome” or “Three Coins in the Fountain”. She goes to Italy for the food, not the art nor the literature; not the history nor the philosophy. Even her attempts at learning the language are pathetically related to the food… She goes to India next and her India is some mystical fun-fair that reeks of supermarket-shelf religion: “On Special Today – Guru Meditation at Ashram”. Nothing deep and meaningful, no insight, no true enlightenment, no involvement in Indian society and its multitudinous current-day problems. No involvement in the religious issues posited by the coexistence of Islam and Hinduism. She is not touched by the real India. Her interaction with other inmates of the Ashram is self-serving and her brand of Indian spirituality is that which she could have found easily in New York. She flies to Bali and Liz’s Bali is shallow and comfortable. Her interaction with the medicine man is trite. Her only selfless act is her charitable gesture towards a traditional healer in need. But is it really selfless or does she do it as a moral catharsis that makes her feel better? She finds love in Bali and she scorns it because she doesn’t need it, or so she says. She has no compunction in telling the man that offers her his love: “I don’t have to love you to love myself!” Amazing self-obsession!

This is an extraordinary story of a woman who is so selfish for the most part, that all she wants out of life and people is to take, take, take. There is no natural selfless giving, no gracious sharing, no acceptance of the bounty of good fortune, but always a quest for ever more things and people according to what she feels she needs at that moment. This is a spoilt brat all grown up, an egotistical woman, a mediocre human being (not really evil, but at the same time not really good or virtuous or gracious), a boring person, a shallow existence. Poor Julia Roberts does her best to give the role all she can, but this is individualistic and selfish bilge dressed up as a philosophical-religious-mystical-emotional homily. Is this heroine what modern women aspire to?

I may sound a trifle acerbic, but the film was quite annoying in many ways. It was a fantasyland of platitudinous, facile and superficial tediousness. It was presented in such a didactic, life-changing, aggrandising way that one was immediately distanced by it. I did not want to do anything with this Liz woman, as shown by the movie. This was not a human being that I felt had made the world a better place to be in. Liz had striven hard to make Liz feel better, more comfortable, more loved, more spoilt, more content. And of course for Liz and every other Liz, “Après moi, le déluge”…
Posted by Intelliblog at 01:51