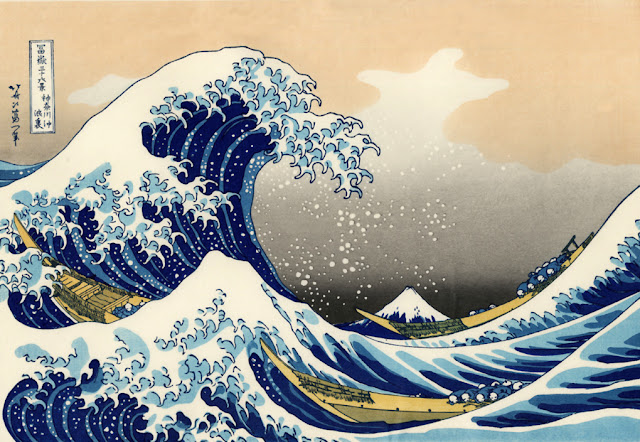 “Noble souls, through dust and heat, rise from disaster and defeat the stronger.” - Henry Wadsworth Longfellow

Japan continues to dominate newscasts and increasingly horrific news stories surface as the full extent of the disaster becomes known. The world watches anxiously as nuclear calamities now threaten the already devastated country and its people. Donations are already being collected here in Australia, and the world over, and most countries are helping Japan in a very palpable way through the sending of supplies or personnel. Please help if you can!

“The Great Wave off Kanagawa” is a very famous image by the Japanese artist Katsushika Hokusai (1760-1849) from his series of woodblock prints “36 Views of Mt Fujiyama”. Hokusai’s most famous picture and probably the most famous image of Japanese art is a seascape with Mt. Fuji in the distance. Hokusai loved to depict water in motion and this is an amazing image where fishermen do battle with the giant wave. The impending crash of the wave brings tension into the composition. In the foreground, a small peaked wave beneath the towering one above it, forms a miniature Mt. Fuji, which is repeated hundreds of miles away in the enormous Mt. Fuji in the background which shrinks through perspective; the wavelet is larger than the mountain.

Although this print is often used in tsunami literature, there is no reason to suspect that Hokusai intended it to be interpreted in that way. The waves in this work are sometimes mistakenly referred to as tsunami (津波), but they are more accurately called okinami (沖波), great off-shore waves.

This is an uncharacteristic Japanese image, as instead of shoguns and nobility, we see tiny fishermen huddled into their boats as they try to negotiate the stormy sea. The yin-violence of the sea is counterbalanced by the yang-relaxed confidence of expert fishermen. Although it’s a stormy sea, the sun is shining. Traditional Japanese artists would have never depicted lower-class fishermen (at the time, fishermen were one of the lowest and most despised of Japanese social classes); they would not have used perspective; they wouldn’t have paid much attention to the subtle shading of the sky. We, as westerners liked this type of woodblock print because it uses conventions that are familiar to us.

The elements of this Japanese scene originated in Western art. It includes landscape, long-distance perspective, nature, and ordinary humans, all of which were foreign to Japanese art at the time. The Giant Wave is actually a Western painting, seen through Japanese eyes. By the late 1700s, Dutch paintings had become very popular and common so that their etchings were used as cheap illustrations. Dutch merchants smuggled their goods into Japan. These wares were often wrapped in paper that had been illustrated with these etchings. For Hokusai and other artists, the thrown-away wrappers were more interesting than the imports.

Hokusai found Western art fascinating and was greatly stimulated by it. He transformed Dutch pastoral paintings by adding the Japanese style of flattening and the use of color surfaces as a element. His masterpieces were in fact a reinterpretation of Western art in Japanese style. By the 1880s, Japanese prints were all the rage in Western culture and Hokusai’s prints were studied by young European artists, such as Van Gogh and Whistler, in a style called Japonaiserie. Thus Western painting went to Japan, was transformed after it inspired Japanese artists, then returned to the West and inspired westerners again!

This image is an icon of Japanese art and a glorious testimony of Japanese culture and spirit. Japan will survive this disaster and rise again to take its place amongst other great nations of the world.
Posted by Intelliblog at 21:24