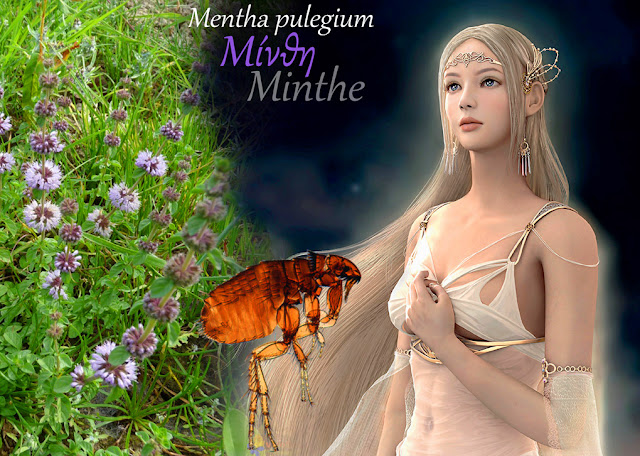 “O! Beware, my lord, of jealousy;  It is the green-eyed monster which doth mock  the meat it feeds on.” - William Shakespeare

The Greek myth to explain the origin of mint concerns a nymph, Minthe who lived in Elis in Southern Greece. Minthe was the lover of Hades, the god of the underworld. She was in love with him but he was fickle. When Hades saw the lovely Persephone on Mount Etna in Sicily, he fell in love with her and abandoned Minthe. Hades took Persephone to the underworld and made her his queen. The discarded Minthe complained bitterly, and raved foolishly for jealousy, and Demeter (Persephone’s mother and goddess of crops, fertility and vegetation) in anger trampled upon her with her feet and destroyed her. For she had said that she was nobler of form and more excellent in beauty than dark-eyed Persephone and she boasted that Hades would return to her and banish Persephone from his halls. From poor Minthe’s corpse, the earth sprouted forth the fragrant herb that bears her name.

In the neighbourhood of Pylos, to the north of Olympia, there was a hill called after Minthe, and at its foot there was a temple of Pluto, and a grove of Demeter. Around the temple grew mint abundantly, so even after her death, Minthe embraced the object of her affection.

In Scotland, the herb is also known as “pudding grass” as it was used to flavour haggis pudding.  Pennyroyal growing in the garden protects against the evil eye but at the same time, it was worn by witches.  Medicinally the herb was used to expel the afterbirth, and presently pennyroyal tisane is thought to relieve colic and to aid in digestion.  Pennyroyal in the language of flowers conveys the sentiment: “Go away, flee!”  It is under the dominion of Venus, astrologically.

jealous |ˈjeləs| adjective
• Feeling or showing envy of someone or their achievements and advantages: He grew jealous of her success.
• Feeling or showing suspicion of someone's unfaithfulness in a relationship : a jealous boyfriend.
• Fiercely protective or vigilant of one's rights or possessions : Howard is still a little jealous of his authority | they kept a jealous eye over their interests.
• (of God) Demanding faithfulness and exclusive worship.
DERIVATIVES
jealously adverb
jealousy noun
ORIGIN Middle English: From Old French gelos, from medieval Latin zelosus from Greek zēlos, zeal.

I remember at school I learnt that jealousy was not the same as envy. Jealousy had a specifically romantic or sexual connotation, whereas envy had a broader meaning. It is possible to be envious of another’s success, but one is jealous of a successful rival for the affections of one’s girlfriend. Othello was jealous, but not envious. The meanings are now being conflated and blurred, and one routinely hears that someone is jealous of someone else’s fame (as is apparent from the first definition above). This is regrettable as the two emotions (material envy and romantic jealousy) are not at all the same, and a clear linguistic distinction between them should be maintained.
Posted by Intelliblog at 10:00