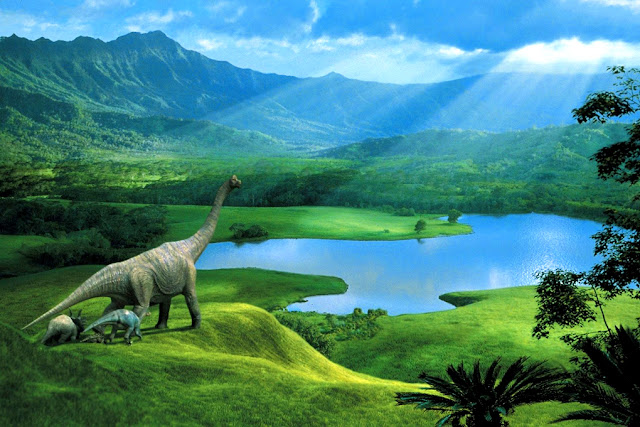 “What makes the desert beautiful is that somewhere it hides a well.” - Antoine de Saint-Exupery

We watched Eric Leighton’s and Ralph Zondag’s 2000 movie “Dinosaur” at the weekend. We had bought the DVD on special a couple of years ago, but had never watched it as it sat forgotten on a lower shelf amongst already viewed DVDs. It pays to do some dusting and tidying up, rearranging of shelves and general sprucing up around the house. One tends to discover all sorts of interesting things! In any case, we were in the mood for something lightweight and a Disney film was deemed appropriate. I am great lover of children’s books and films and will often indulge myself as I believe that one must always feed the hungry little child within.

The film was very polished (almost too polished, as can be the case with computer-generated animation) with CGI taking over in a big way and generating effects and animation that are quite amazing. However, in some of the scenes the CGI creatures can look plastic and one can be distracted from the action. One is immediately tempted to compare the Disney “Dinosaur” with Steven Spielberg’s 1993 “Jurassic Park”, as computer graphics and special effects feature prominently in both of these dinosaur films. However, where “Jurassic Park” was exciting, adventurous, thrilling, scary, funny at times with a rollicking good story, “Dinosaur” tends towards saccharine sweetness and didactic moralising – besides which, the story is rather unoriginal and seems to have been compounded from a host of other films: A dash of “Bambi”, a peck or two of “The Land Before Time”, a sliver of “Ice Age”, a soupçon of “Ice Age 2”, a touch of “Mowgli” etc, etc.

The plot revolves around pack dinosaurs known as Iguanodon. During an attack on a pack of Iguanodon, an egg is saved although stolen by predators and ends up in the possession of a group of lemurs. The lemurs care for the young iguanodon hatched from it, which they call Aladar. Aladar becomes an “honorary lemur” as he grows up and spends his time peacefully on an island far away form other dinosaurs. When a meteor hits the earth, a huge tidal wave forces Aladar and his family to leave their homeland. They meet up with a huge group of dinosaurs, led by Kron and Bruton, fellow iguanodons, as well as other dinosaur species. In the wake of the meteor disaster, they try to reach their nesting grounds, but the way there is fraught with danger and great struggles.

The film is full of factual errors and anachronisms, but that is immaterial as it is not a documentary, it is a fantasy. If you can accept that dinosaurs can talk and exhibit anthropomorphic characteristics, it is not hard to accept that lemurs (which evolved 55 million years ago) and dinosaurs (which became extinct 65 million years ago) coexisted. What’s ten million years between friends? The size of the creatures is also misrepresented. The carnotaurs that hunt the iguanodon have been increased in size to make them look more terrifying and the triceratops and apatosaur are not to scale. The habitats of the animals depicted also do not coincide, with animals that lived on different continents being put side by side. But never mind!

If we overlook the deficiencies of the film, it is a good film to watch in one’s lighter moments and children will love the animals and the simple story. Although there are some violent scenes that could scare smaller children (or over-sensitive adults). The music by James Newton Howard is discreet and suits the action, while top marks go to the artists that conceived the background art, which in my opinion s quite ravishing, to the extent of being almost distracting. I found myself admiring the skies and seas, waterways and grasslands, forests and deserts rather than the animals, which were speaking trite homilies at times.

Well worth seeing this film if you find it, but once again if you like a juicier story and a more exciting film, go for “Jurassic Park”!
Posted by Intelliblog at 00:32