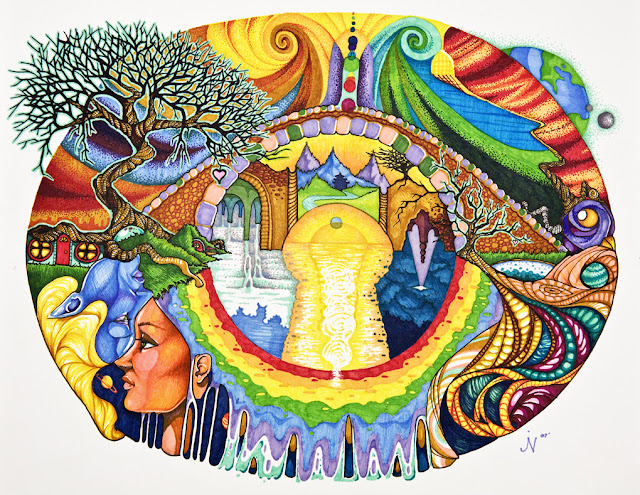 “Only in love are unity and duality not in conflict.” - Rabindranath Tagore

For Art Sunday today, a whimsical and talented artist from the USA, Jaeme Newton. She has a distinctly personal style and uses a variety of media to create striking drawings of fantastical creatures and mythical animals. The drawings are detailed and very fluid, showing evidence of a rich inner voice and an imagination that leaps and flies into wonderful new worlds.

Jaeme Newton was born the 19th of May, 1982 in Green Brae, California. She spent her childhood traveling to various places throughout the western United States with her father (a political satirist, poet and children's book author) and her younger brother. Shortly after turning fourteen, Jaeme and her brother moved to Huntsville, Alabama to live with their mother and other siblings.

From 1998 Jaeme moved again and furthered her study of art in school at Miami, Florida, and began to paint in her home on a daily basis. Six months later Jaeme’s family moved again, and Jaeme began attending school at Albertson College of Idaho shortly after graduation from Fruitland High School in May of 2000.

Jaeme moved to Somerset, Kentucky where a friend of hers was starting a band named "nemo" in which Jaeme took up the bassist position and toured with 2003. Jaeme took time out to really explore the musician in her. In the course of three years, Jaeme produced three LPs , and one full length CD named “Live from the Theatre of Memory”, which there are very few copies of today.

The drawing above is called “Bridge” and shows a rich tapestry of images, wonderfully vibrant colour and a vivid imagination. I can relate to this drawing personally as it resembles very much some of my own drawings and the composition is very reminiscent of a series of drawings I did several years ago in my “visual diary”. There is a strong rhythmic element to the drawing with the central bridge linking the two sides of the drawing, which surround the bridge and yet are separated by it. There are astronomical figures, rainbows, exuberant swirls of colour and plant elements, as well as the two faces in the lower left that interlock an seem to mirror the two sides of the bridge. The bridge separates the two sides, but also joins them. The faces are joined and yet are different. Yin and Yang, night and day, good and evil, all melding together in a complex and multifaceted drawing that is quite satisfying to explore and delve into.
Posted by Intelliblog at 10:16