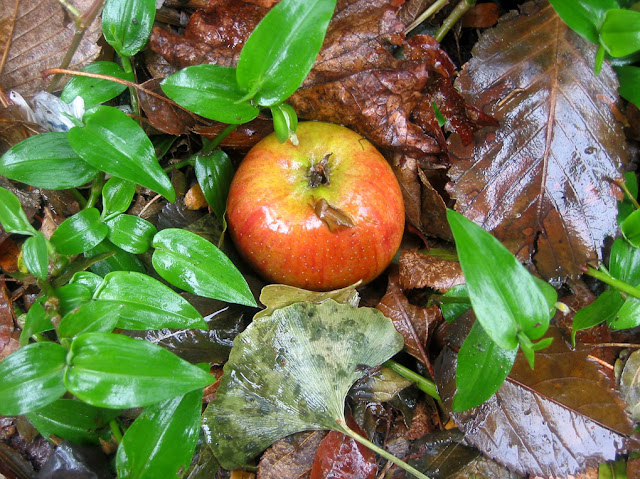 “Everyone must take time to sit and watch the leaves turn.” - Elizabeth Lawrence

A cool, grey, rainy day today. The weather bureau has reported that the La Niña pattern affecting Australia is the strongest since 1917. It started in the middle of last year and has contributed to the warmest oceans on record around Australia. Floods have drenched wide areas in recent months, wrecking properties, cutting off roads and filling rivers and dams. The current weather cycle is expected to end in the next two months and the forecast beyond is for a wetter-than-normal winter and a drier-than-normal spring.

When I came home from work today, I sat for a few minutes under the covered gazebo, looking at the garden. The rain was quietly falling and the picture was one of summer departing gently. A cool, wet summer that came in reluctantly and now is leaving us on tiptoe. As if we are sleeping and wishes to cede its reigning place to Autumn surreptitiously. I felt tired and old all of the sudden. The lingering cold that I have has not helped and sniffling, coughing and sputtering I hurried inside, mindful of my silliness and shaking off my chill.

I have a meeting later this week with the publishers that I work with to discuss a new edition of one of my books. It is going well and it is its time to be updated in a new edition. This signals another big project looming ahead. Summer’s end, autumn’s beginning. The season of fruitfulness an abundance, ushering in the desolate winter with its deathly chill…

The poem below written just now:

Sun rises reluctantly each morning now,
And evening falls all of the sudden rapidly.
The leaves started to yellow on the bough,
And evening drags on, lengthening vapidly.

My life’s work is reaching now its summer’s end
A bounteous autumn or a barren winter to attend.
Posted by Intelliblog at 21:33