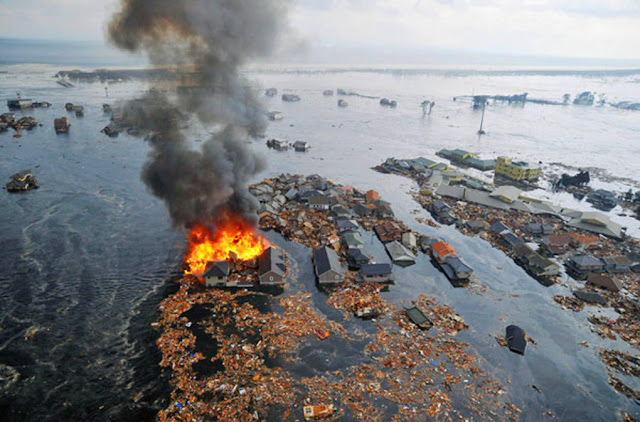 News of the massive earthquake and tsunamis in Japan awaited me as soon as I got home this evening. The pictures on television are frightening and awesome. One cannot comprehend the scale of destruction simply by looking at the aerial shots where the crest of the tidal wave carries every bit of imaginable flotsam as it covers fields, roads, houses, factories and woods. We thought that the Christchurch earthquake was bad enough, but this is just horrific. Even a country like Japan, used to earthquakes as it is, is now reeling after this latest quake, which neared the magnitude of 9 Richter units.

Although the structural damage in the affected parts of Japan may not be as extreme as in other places due the fact that the Japanese have long built anti-seismic constructions, the post-quake effects are many and extreme, largely due to the destructive force of the tsunamis that followed the quake. At least two people are reported dead at this stage (four hours after the quake), one hit by a collapsing wall at a Honda factory. Several people are reported buried in a landslide.

The tsunami generated was up to 10 metres high, with waves sweeping across farmland, carrying away homes, crops, vehicles, triggering fires. A tsunami of 7 metres later hit northern Japan. An inn collapsed in Sendai city and many are feared buried in its rubble. Strong aftershocks hit northern Japan, each the magnitude of a major quake. Tsunami warnings issued for eastern Indonesia, Taiwan’s north and east coasts.

Power has been cut to four million homes in and around Tokyo, while fourteen fires blaze in Tokyo. A major fire and explosions at Chiba refinery near Tokyo is causing much damage. Many sections of Tohoku expressway serving northern Japan are damaged. Bullet trains to the north of the country stopped.

Narita airport closed, flights halted, passengers evacuated. Tokyo underground, suburban trains halted. Sendai airport in the north has been flooded. Several nuclear power plants in Japan have shut down automatically. Tepco’s Fukushimi No. 1 plant had an equipment problem after the quake, but safety is ensured, officials say. At least one nuclear power station is still operating normally. Oil refineries have shut down and a major steel plant was ablaze.