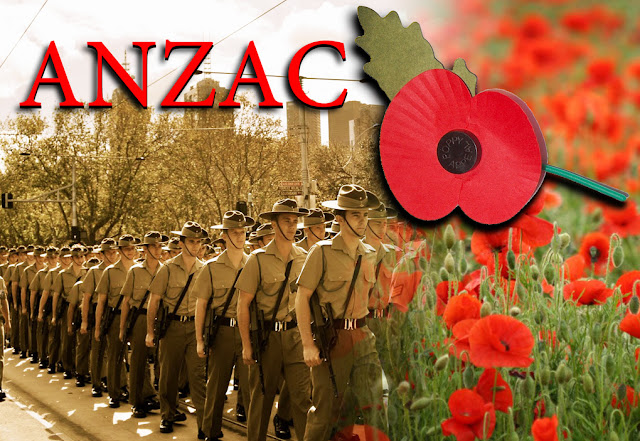 “We have failed to grasp the fact that mankind is becoming a single unit, and that for a unit to fight against itself is suicide.” - Havelock Ellis

Today, Easter Monday, is also Anzac Day, which is observed in Australia and New Zealand as a day of commemoration for those who died in the service of their country, and is a day for honouring returned servicemen and women, whichever battle or war they served in  The 25th day of April is the anniversary of the landing of the Australian and New Zealand Army Corps (ANZACs) at Gallipoli in 1915. On the first anniversary of that landing services were held throughout both countries in remembrance of the thousands of Australian and New Zealand soldiers who died during the eight-month Gallipoli Campaign.

Since 1916 Anzac Day has evolved to the observance we commemorate today. The day of observance begins before dawn with a march by returned and service personnel to the local war memorial, where they are joined by other members of the community for the Dawn Service. This is a solemn and grave ceremony which brings to mind the lives lost and the terrible futility of warfare, whether it happened in Gallipoli, in the Middle East, in America, in Vietnam, in Afghanistan, the Gulf or in Korea…

The assault on the Gallipoli Peninsula began on the 25th April 1915, as an attempt by Allied Command to weaken the strategic position of Germany, Austro-Hungary and Turkey who were allied in the first world war. It was the Australasian Expeditionary Force’s first major engagement of the First World War after their training in Egypt. By the end of the first day of warfare on the Gallipoli peninsula, about 2,000 allied troops lay dead. The bloody fighting continued, and by the end of the first week more than 6500 ANZACs had been killed or wounded. Many thousands of Turks also died there.

Not all brave acts at Gallipoli met with success, however. The film “Gallipoli” tells the story of the 10th Light Horse Regiment from Western Australia and the brave but pointless attack at a place called The Nek. After several mistakes that gave the Turks time to prepare for an attack, the Australians fixed bayonets, leapt out of their trenches and charged the Turkish lines. In just 30 seconds, the first wave of men had all been killed or wounded. The Turks eventually stopped shooting and the battlefield fell silent.

After only two minutes, the second wave stormed from the trenches, into the wall of hot lead and steel. The final wave of ANZACs remained in the trench. They knew the attack was now pointless, and waited for the Generals down on the beach to order them to stop. But the only order they received was to attack. Brothers said goodbye to each other, and friends stood side by side. As they leapt out of the trench they jumped over the bodies of their friends who had been alive only minutes earlier, and knew they would soon join them. No ANZACs ever reached the Turkish trenches. In 1919, after the war was over, several ANZACs went back to Gallipoli to bury their dead properly. At the Nek, they found the bodies of more than 300 Australians in an area smaller than a tennis court.

After eight long months of bitter fighting, the British High Command decided that the war at Gallipoli was too costly when they were also fighting other battles in Europe. The ANZACs alone had lost 10,000 men, and so the order came for a withdrawal. Since the first anniversary of the Gallipoli landing in 1916, Anzac Day has evolved to acknowledge the sacrifice and service of subsequent wars and to encompass new understandings of the full impact of armed conflict on those who have served their country.

The 1981 Peter Weir film “Gallipoli” is a film that captures the spirit of Anzac Day and makes for poignant viewing, especially for anyone who has been in a war zone of been affected by warfare. It is acted well by the young Mel Gibson, Mark Lee and Bill Kerr and it is a film that established Gibson as an international star.

It is an excellent anti-war film that establishes this premise subtly and often with wry humour. It is Australia’s version of “All Quiet on the Western Front”, but instead of using the soldiers’ conscience as its premise at that film does, Gallipoli hinges on the Australian cultural foundation of “mateship”. War brings together mates, then it cruelly separates them. The last twenty minutes of the film are particularly illustrative of the callous and brutal nature of war. I think that long though the film is, and a little slow at times, it still is one of the best Australian films, having substance and meaning, but also emotional strength and a pillar in Australia’s culture.

Lest we forget…
Posted by Intelliblog at 23:03