A DAY AT MONTSALVAT 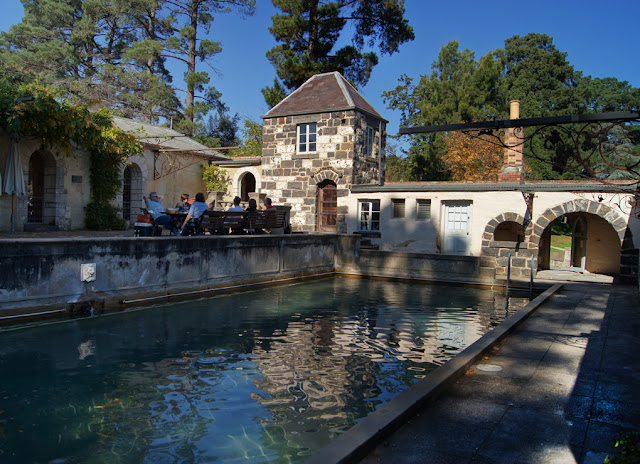 We had a wonderful Autumn day today with bright sunshine and a crisp morning that matured into a warm afternoon. We made the most of the last day of the Easter holidays by driving to Eltham and visiting “Montsalvat”, a wonderful place we hadn’t been to for quite some years. The place is still beautiful and there have been some renovations and refurbishments, however, it was good to see s few artists still in residence. Nevertheless, one can see that it is now more of a function centre and has several formal exhibition spaces where art is shown regularly rather than a true artists’ colony.

Montsalvat was originally established as a true artists’ colony in over 12 acres situated in Eltham, an outer suburb of Melbourne Australia. It was founded by architect and artist Justus Jörgensen (1893-1975) in 1934. It is home to a small hamlet of various buildings, houses and halls set amongst extensive established gardens. The colony of Montsalvat reflects very much the life of Justus Jörgensen and his friends and family. Its buildings and gardens are now very much a part of the history, art and culture of Melbourne. Architecturally, Montsalvat has much in common with a simple French village in Provence revealing a mix of rustic architectural styles.

The name Montsalvat is met with in both German and English mythology. In the German opera “Parsifal”, by Richard Wagner, Montsalvat is the castle, built by Titurel, where the Holy Grail is protected. In the English legend of “King Arthur and the Knights of the Round Table”, Montsalvat is mentioned as the home of the Holy Grail. Jörgensen obviously drew on this lore and legend for his inspiration and his grandiose plans are nowhere more apparent than in his “Grand Hall” and adjoining buildings. This is built in the style of a mediaeval manor, and by all accounts Jörgensen ran Montsalvat as a feudal estate in which he ruled as an autocrat. This caused a few of the artists that were initially attracted there to leave forthwith.

All of the buildings on the site were designed and built by residents with locally available materials, such as stone, timber and brick, from various sources. The Great Hall offers an extensive range of spaces from extravagant halls and vast exhibition spaces, to small corridors, little rooms, secret alcoves, mezzanine floors and tiny balconies overlooking the gardens. The grounds and buildings of Montsalvat are now mostly used for exhibitions, performances, conferences, seminars, weddings and receptions. However, a handful of craftspeople and artists (such as Luthiers, Jewellers, Painters, Sculptors and a Writer) continue to reside in Montsalvat. Several classes on various disciplines of art are offered year round by the resident artists. There are small shops that sell the works of these artists and there is also a small gallery housing an exhibition of the work of resident artists.

We had a wonderful day, wandering through the grounds, gardens, buildings and chapel. We admired the paintings in several exhibitions, saw some of the craftspeople and artists at work, conversed with some of the residents and generally enjoyed the atmosphere and the milieu. Montsalvat is certainly one of the jewels in Melbourne’s touristic crown, but most of the people we met there were in fact locals. Whatever the case may be, Australia is still very far away from everywhere and hence off the beaten tourist path.

See more of my photographs of Montsalvat here.
Posted by Intelliblog at 23:12