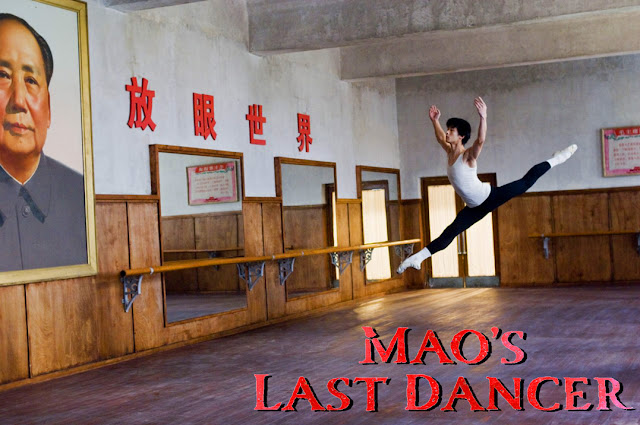 We watched the Bruce Beresford 2009 film “Mao’s Last Dancer” at the weekend. This was a film that I had heard a lot about and some friends had recommended the autobiographical book by Li Cunxin, on which the film is based. As the movie was on special at the video shop we decided to get it and watch it. Jan Sardi wrote the screenplay based on this book and as I haven't read the book I shall refrain from commenting on how faithful an adaptation the film was, and thus review the film only.

First, if you dislike ballet, this film is not strictly speaking for you as it is about a ballet dancer and his rise to success. Admittedly, the actual ballet scenes themselves do not make up an enormous part of the film (so if you are a ballet fan, you may think that this is a disadvantage), however, there is lot of time spent on screen on the training of ballet dancers. This may drag on for people who do not like ballet. But, at the same time one cannot be but impressed by the rigour of this training, which is not unlike that of a top athlete (in fact more rigorous than some types of athletic training!).

The story is an oft-told tale of gifted youngster, who grows to be an exceptional artist in a non-Western country. He is given the opportunity to travel to the West and make a choice of whether to defect or not, sacrifice all for his art, fame and fortune, or forget his art and go back to his homeland and family. This film tells the real story of a boy, Li Cunxin, born sixth in a poor peasant family with seven sons. He is picked out from a provincial school in Qingdao by Madame Mao’s artistic scouts to train as a ballet dancer in Beijing in the 1970s. In the early 1980s, a visiting American choreographer from Houston notes Li’s talent and brings him to the USA to dance, where Li gains fame as a ballet dancer in the short time he is there. After experiencing first-hand the differences in the lifestyle and culture of  China and America, Li is faced with a dilemma. Should he return to the motherland to which he had always been taught to be loyal, or should he remain in his newly-found land of freedom and home of the girl he loves?

Beresford is an experienced enough director to weave the story of Li’s childhood and youth in China with his life in the US expertly and in a way that is engaging and lucid. Too many films with flashbacks end up being annoying, but this was well done. Beresford is a veteran Australian director who can produce popular films, and for this film, he definitely pleases the crowd, at least the crowd that likes to watch ballet and ballet dancers.

The two actors playing Li were Chengwu Gao (Li as a boy) and Chi Cao (as an 18-year-old), who both did fantastic work, given that neither is a professional. Chi Chao played in this film his first ever role with aplomb and disarming ingenuousness. As Ben Stevenson, the Houston Ballet artistic director who campaigns for Li to study in the US, Bruce Greenwood displays competency, with a well-grounded performance that ensures Ben’s culture and flamboyant personality is portrayed with restraint. There are fine performances also by all actors playing the Chinese characters, for example Joan Cheng, Chengwo Guo and Ferdinand Hoang. There are a few Australians in the cast also, Penne Hackforth-Jones and Jack Thompson being instantly recognisable faces for Australian viewers.

The film has humour and poignancy, is fast-moving, interesting and yes, even the non-balletic amongst the crowd will find it engaging to watch. The ballet sequences that are portrayed are well done and well-placed within the film. There are some wonderful scenes from Tchaikovsky’s “Swanlake”, Minkus’ “Don Quichotte” and Stravinsky’s “Rite of Spring”. We enjoyed the film and recommend it highly.

Interestingly, even though it’s not mentioned in the film, when Li’s dance career came to an end he re-trained as a stockbroker, and he now lives in Melbourne. Certainly a “lived happily ever after in the decadent West” story!
Posted by Intelliblog at 01:31