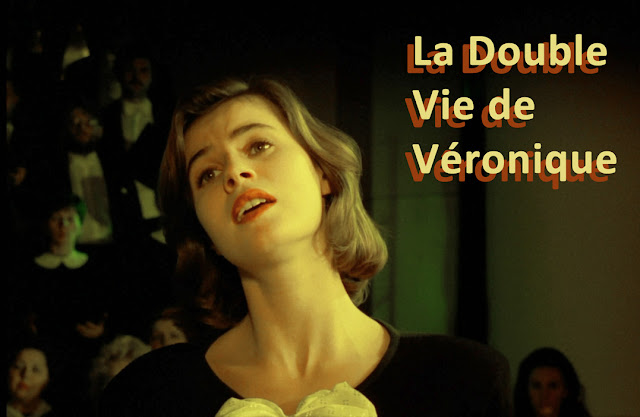 We watched a DVD that we bought at a market at the weekend. I had been looking for this film on and off whenever I remembered it, as I had heard a lot about it, and I had found it once in a DVD shop, but at $36 I was not going to buy it. At about a quarter of the price, it was much more attractive to buy at the market, and we finally got to watch it! I am glad that we did, although I can now understand why the comments I heard about the film were a little controversial. It is a typical “European Art Film”, which description would put many viewers off straight away! The other thing that may put off some people is that it won two prizes at the Cannes Film Festival in 1991, and several other international film critics’ prizes – that is another negative for many!

The 1991 film is Krzysztof Kieslowski’s “La Double Vie de Véronique” (The Double Life of Veronica). This is a Polish/French production and it stars the youthful and luminous Iréne Jacob who for this role won the best actress prize in Cannes. She is supported by a Polish/French cast and the film is set in both Krakow, Poland and Paris, France. As the title suggests, Iréne plays a double role, the Polish Weronika and the French Véronique. The whole film is based on the premise of the Doppelgänger (an apparition or double of a living person). Weronika and Véronique never meet, although their paths cross once, but their lives show some curious intermingling and amazing connections.

The film operates on many levels and can be interpreted in a variety of ways, as its texture is rich and the story simple enough. However, it is full of beautiful images, complex incident and overlapping viewpoints. The personality of the two Veronicas is quite different, yet they do share many sensitivities and their interactions with the other characters provide much to explore for the viewer. The film is slow and the lack of a forward driving storyline with a definite introduction, build-up to a climax and a strong dénouement will put many people off. However, it is an engaging film where the viewer shares in the creative process and just like one of those “join-the-dot” pictures, it is only when all the dots are joined that the final picture is revealed. It is the viewer who needs to join the dots in this film (and some of the harsh critics may say that the viewer has to number the dots as well!).

Weronika in Krakow is a very talented singer who also has a heart condition. She decides to become a professional singer and is successful in her audition to join a prestigious choir as a soloist. Véronique in Paris is a musician also, but on a whim decides to abandon her singing lessons and prospects of a professional career, and rather continues teaching (rather untalented) children the rudiments of music. Her life seems to be the complete opposite of Weronika’s, and this is also seen when one life ends tragically, while another continues rather more optimistically. As one may suspect, music plays a key role in the film and the music score is quite beautiful, written by composer Zbigniew Preisner who has collaborated with Kieslowski before in his “Three Colours” trilogy, especially so in the remarkable “Three Colours: Blue” with Juliette Binoche.

“O Ye, who in some pretty little boat,
Eager to listen, have been following
Behind my ship, that singing sails along,
Turn back to look again upon your shores;
Do not put out to sea, lest peradventure,
In losing me, you might yourselves be lost.
The sea I sail has never yet been passed;
Minerva breathes, and pilots me Apollo,
And Muses nine point out to me the Bears.”

Dante describes the ascent to heaven and Iréne Jakob really looks angelic as she sings the soaring verses. It is easy to see how she became Kieslowski’s muse (she starred again in his “Three Colours: Red” of 1994). This scene together with some others relating to stars, and Veronica’s name itself, have prompted some to interpret the film on a Christian theme (I had difficulty with this interpretation). Others view it more as an existentialist flibbertigibbet that can be seen as substantial or as lightweight as one cares to make it.

The cinematography is stunning and the use of colour quite beautiful. The film presages the “Three Colours” in this respect and one can see the germs of ideas that Kieslowski incubated in order to arrive at the later films (1993/4). The full colour interspersed with an almost sepia effect, the dated, almost hand-tinted look and the images of almost no colour at all push and pull us into the story and propel the narrative forward. The scenes with the performances of the marionettes has a pivotal role in Véronique’s discovery of herself and the discovery of her double, but is also catalytic in moving her life forward.

An enjoyable, memorable film, deceptively simple on first viewing, but I am sure can be seen again to discover yet more hidden more depths. I don’t generally like seeing films again, but this one I would enjoy seeing again next year. Come to think of it, it’s time I watched “Three Colours: Blue” again!
Posted by Intelliblog at 22:26