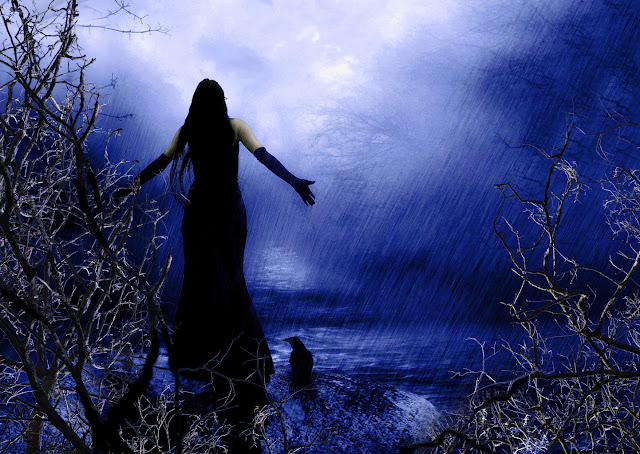 “Something of vengeance I had tasted for the first time; as aromatic wine it seemed, on swallowing, warm and racy: its after-flavour, metallic and corroding, gave me a sensation as if I had been poisoned.” - Charlotte Brontë

Magpie Tales stimulates the creativity of her followers weekly by choosing an image, which fires the imagination and results in a swathe of poems and short prose pieces in its succession. This week the image was dark and evocative of witchery and the black arts. It appears that this image was very popular with Magpie’s readers as there seem to be a large number of participants!

Here is my contribution – a sad story of love and trust betrayed, with a terrible vengeance wrought, complete with a spell in an arcane tongue of my own invention. Now if you are to use this spell, do so wisely for it is full of terrible power and can wreak great havoc! Enjoy this week’s tales of mystery and imagination as the supernatural never ceases to fascinate most of us and come to think of it, it has repeatedly stimulated the creation of some good stories, poems, paintings, drawings and other flights of the imagination!

She rises tall and speaks the spell
Her figure dark, her hair so long.
Her raven black, hearkens the knell
Of distant bell and silvern gong.

Her fury matched by lashing rain
Her tearful face all haggard, drawn.
Her spell a terrible refrain
Her voice resounding till dawn.

He left, she cried; alone, bereft;
He fled at night, his sojourn brief –
He cheated her with wiles so deft,
He robbed her love as would a thief.

His hours short each second’s fleet
Her spell is cast, and now complete.
The raven rises, quickly flies
The faithless lover gasps and dies.

The woman smiles her work’s all done
Her witch within the spell has spun.
With frightful magic she’s avenged;
The wrongs he’s done are now revenged.
Posted by Intelliblog at 21:16