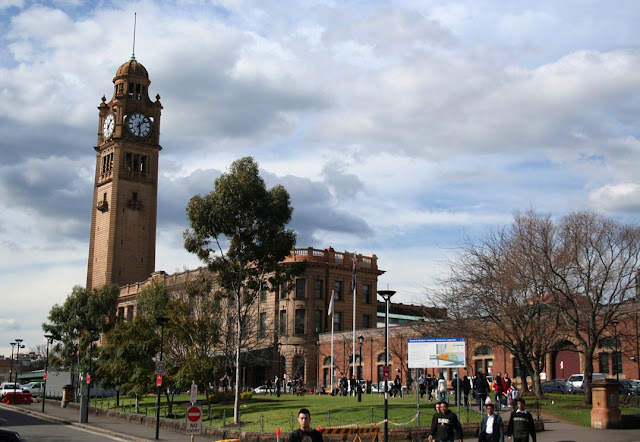 “Railway termini are our gates to the glorious and the unknown. Through them we pass out into adventure and sunshine, to them, alas! We return.” - E M Forster

I am in Sydney for the day for work and I have had an interesting, full day once again, very busy, but at the same time quite satisfying. This is largely because of several good meetings, but also because of a successful audit by the government regulators. I did not have much time to myself nor did I get a chance to go out into the City at all (hopes of a lunch off-campus were rather unrealistic!), however, much work did get done, which was the whole point of the trip in to Sydney after all!

Our Campus is directly opposite the Sydney Central Railway station, which is a very central location and easily accessible by public transport, buses as well as trains. Furthermore, it is so easy to get to and from the airport via the airport train. This is not only an economical way of travelling, but it also is the easiest and fastest way to get to the City from the airport. A very convenient and environmentally friendly alternative to catching a taxi into the City.

The Central Railway Station (also known as Sydney Terminal) is the largest railway station in Sydney, but also the largest in Australia. It is located on the southern end of the Sydney CBD and it services almost all of the lines on the CityRail network (all except the Cumberland line). It is the major terminus for inter-urban and interstate rail services, 27-32 trains per hour each way, and additional trains during weekday peak hours. Central Station houses the operations of New South Wales Railways and sits beside Railway Square, officially located in Haymarket. Central is the station closest to the University of Technology Sydney at Broadway.

The building is a Sydney icon and is definitely one of my favourite old buildings in the Sydney CBD. Despite its name, Central Station has never been at a central location within Sydney. It has however long been central to the operations of New South Wales Railways. The remoteness of “Central” from the true commercial hub of Sydney stimulated the construction of the Sydney underground railways at an earlier date than the equivalent in Melbourne, where all of the main stations were in the CBD.

There have been three railway stations on the current site. The original Sydney Station was opened on 26 September 1855 in an area known as “Cleveland Fields”. This station (one wooden platform in a corrugated iron shed), which was known at the time as Redfern, had Devonshire Street as its northern boundary. When this station became inadequate for the traffic it carried, a new station was built in 1874 on the same site and also was known as Redfern. This was a brick building with two platforms. It grew to 14 platforms before it was replaced by the present-day station to the north of Devonshire Street. The new station was built on a site previously occupied by a cemetery, a convent, a female refuge, a police barracks, a parsonage, a Benevolent Society and a morgue! This new 15-platform station was opened on 4 August 1906 and is still in use.

The Western Mail train that arrived in Sydney at 5:50am on 5 August 1906 went straight into the new station. Devonshire Street, which separated the two stations, became a pedestrian underpass to allow people to cross the railway line and is now known by many as the Devonshire St Tunnel. Sydney station has expanded since 1906 in an easterly direction. A 75-metre Gothic revival clock tower was added at the north-western corner of the station on 3 March 1921. This tower is currently draped in hessian to cover the scaffolding that is allowing restoration work to proceed.

Central Station as it stands currently is probably better thought of as two separate, but adjacent, railway stations. In the days of steam, the station was regarded as being divided into “steam” and “electric” parts. The western (“steam”) half of Central Station, which was formerly known as “Sydney Terminal” and is often referred to as such by Sydneysiders (although it is no longer the official name), comprises 15 terminal platforms and was opened in 1906. This section is dominated by a large vaulted roof over the concourse and elaborate masonry composed primarily of sandstone, the most common rock in the Sydney region. This western section is popularly known as the country platforms, even though only four platforms are commonly used for long-distance trains. Most of the 15 platforms are used for CityRail's intercity services that terminate at Central, also known as Sydney Terminal.

The eastern (“suburban” or “electric”) part of Central Station, formerly known as “Central Electric”, consists of 12 through platforms, four of which are underground. These platforms are used by suburban CityRail services, and by a limited number of through intercity services during peak hours. The eight above-ground platforms were opened in 1926 as part of a large electrification and modernisation program aimed at improving Sydney’s suburban railway services. The four underground platforms were built as part of the Eastern Suburbs Railway. Construction commenced in 1948 but the underground railway line was not finished until 1979. While the plans called for four platforms, two were found to be not needed and are currently used as archival storage by the New South Wales Railways.

The architect of the Central Station was Walter Liberty Vernon, who worked on the plans from 1904 to 1906, while the terminal building was designed by George McRae, who finished its construction in 1921. The style is Federation Free Classical, an energetic vibrant and confident Edwardian Australian genre. Stone, steel and glass are freely used in the construction and the whole complex is reminiscent of large railway stations of the period in most major cities around the world. The building is a lovely reminder of Sydney’s history, yet bursting at the seam with life and vitality, contributing to the vibrancy of the City’s atmosphere. It is a wonderful building to view from our Campus windows, not to mention its usefulness as a public transport hub!
Posted by Intelliblog at 01:03