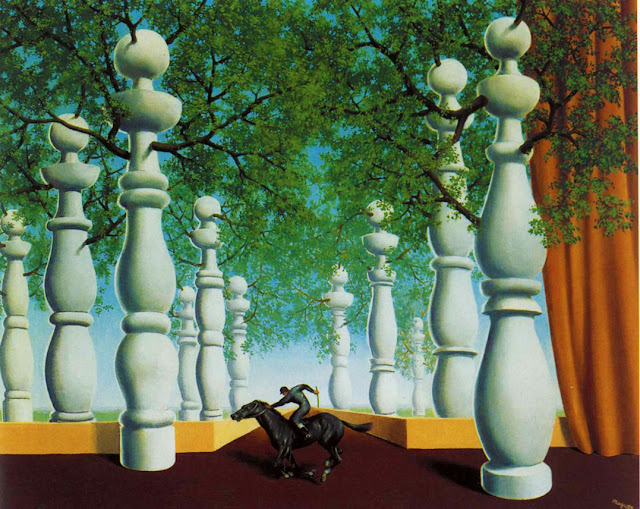 “There are some people who live in a dream world, and there are some who face reality; and then there are those who turn one into the other.” - Douglas H. Everett

Tomorrow is the anniversary of René Magritte’s birth so Art Sunday is dedicated to him. René François Ghislain Magritte was born on November 21st, 1898 at Lessines, a province of Hainaut in Belgium. This surrealist artist is renowned and very popular for his thought-provoking images, which sometimes cause amusement, sometimes shock and often wonder and puzzlement.

Magritte started painting at the age of twelve and his father Leopold encouraged him to pursue his artistic endeavours. When Magritte was fourteen, his mother committed suicide due to depression. The young René was greatly affected after seeing her body, with the face covered. This incident in his life is reflected in his early paintings including “Les Amants”, in which the persons depicted have their faces covered with cloth.

In 1914, Magritte enrolled at the Academy of Fine Arts in Brussels to study painting and learn about the various techniques employed by the Symbolist artists. There, he became acquainted with many of the then famous artists including Pierre Bourgeois, E.L.T Mesens and Pierre Flouquet. Although he was interested in the futurist movement and cubism, his real inspiration was the surrealist works of Giorgio De Chirico.

After completing his studies at the Academy, he married his long time lover Georgette Berger in 1922. For the next four years he found employment as assistant designer in a wallpaper factory until 1926, and it was at this time that he created his first surrealistic work, “The Lost Jockey”. Later in 1927, his first painting exhibition at Brussels received quite adverse criticism, which caused the artist to move to Paris. There, he met André Breton, and subsequently became actively involved in the surrealist movement.

The paintings of René Magritte are considered as a melding of the poetic and philosophical, firmly based on the social as well as intellectual developments of the first half of the twentieth century. Magritte’s manner of depicting ordinary items out of context is often referred to as “magic realism” and this dream-like quality makes his art stand apart from other surrealists. René Magritte died at the age of 68 on August 15th 1967, in Brussels of pancreatic cancer.

Magritte in his art, wishes to put an end to our sense of familiarity with the world. Although he depicted ordinary things in his canvases, he modified them with his imagination and presented them in absurd contexts and with such illusory blends and counter-logical associations that very often the viewers are moved to challenge their beliefs and question their frame of reference. Magritte’s work is thought provoking and his canvases present visual enigmas, which are sure to puzzle and challenge the spectators. Many contemporary artists have been influenced by the remarkable works of René Magritte.

Illustrated here is a re-working of the “Lost Jockey”, this canvas completed in 1942, and obviously based on his 1926 work of the same name. The hallmarks of Magritte’s work are evident in this work. The jockey on his racehorse is galloping out of context in a forest of balusters that are sprouting branches. Or it could be a stage, as the drapery on the right implies. Or all of the above! Clearly the jockey is lost, as the title states, but what is the deeper meaning of this work. The spectator is left to resolve the visual riddle on his own without a clue. It could be a statement about the futility of life, or something equally profound, or it could be a prank of the artist… In any case it is a satisfying artwork that bemuses and amuses, challenges and teases, provokes and stimulates!
Posted by Intelliblog at 10:53