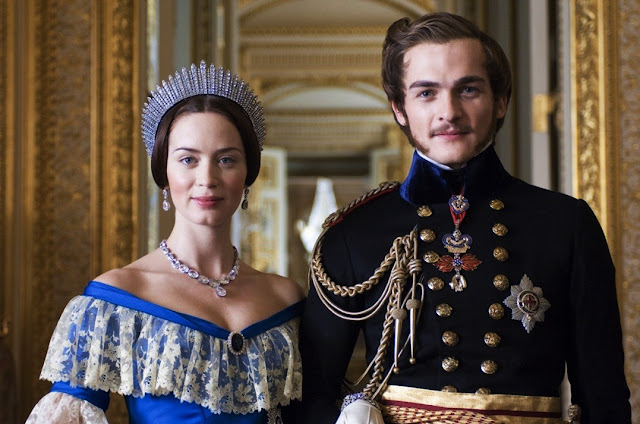 “What is history? An echo of the past in the future; a reflex from the future on the past” - Victor Hugo

We watched an interesting historical/biographical 2009 film at the weekend, directed by Jean-Marc Vallée and scripted by Julian Fellowes. It stars Emily Blunt, Rupert Friend, Paul Bettany and Jim Broadbent. It was a very good Victorian costume drama “The Young Victoria” that dealt with the young Princess Victoria, her accession to the throne, her courtship with Prince Alfred and the early years of her reign and marriage.

Emily Blunt plays Princess Victoria, who is in line for the throne of England, as her uncle, King William (Jim Broadbent) is without a direct male heir, and is not well and does not have long to live. The Duchess of Kent (Miranda Richardson) Victoria’s mother and Sir John Conroy (Mark Strong) her aide (and reputed lover, also), attempt to force Victoria to sign papers declaring them to be the “regents” until she is older, since she is only 18 years of age. The princess refuses, despite Sir John ultimately becoming violent. Victoria seems to have a strong will and wishes to do what is best for her country. When King William IV dies, Victoria becomes Queen, knowing full well that she has a heavy duty before her and much to learn.

She becomes close to the dashing Lord Melbourne (Paul Bettany) who, although an older man, has been mentioned as a suitor for Victoria. He has a strong influence on her, and makes Victoria appear to be taking a partisan approach in her reign. This is unacceptable behaviour that displeases many politicians and infuriates many of her subjects. In Europe, Victoria’s single status hatches some plots in which the German and Belgian royal houses wish to benefit politically from what they see as a “pliable young girl” whom they can influence through a princely consort sympathetic to their cause. Handsome Prince Albert of Saxe-Coburg Gotha (Rupert Friend), and Victoria’s first cousin is prodded by the royal courts of Belgium and Germany to approach the the young English queen. Once he arrives at the palace, however, he falls in love and the feeling seems to be reciprocated by Victoria. The film continues from this point to show their relationship, as well as Victoria’s increasing experience and ability to become the great head of state that she ultimately became.

Emily Blunt shines as Victoria and is well supported by Friend and Bettany. The supporting actors do a sterling job and there is a very believable, convincing creation of palace intrigue and plot hatching by the ensemble work. The cinematography is excellent and the authentic sets and props used contribute to the ambience of the film. The costumes are excellent and the music most well chosen, all contributing to a good costume drama of a fascinating point in British history.

It was an interesting, intelligent, historically accurate film, which pleased on the human level also. The romance between Victoria and Albert is depicted well and injects some approachability and humanity into these two formidable figures that history books tend to present as dehumanised pieces on a geopolitical chessboard. We recommend this film highly and anyone with an interest in history and politics will find fascinating, however, it can also be viewed as an intelligent romantic drama.
Posted by Intelliblog at 15:49