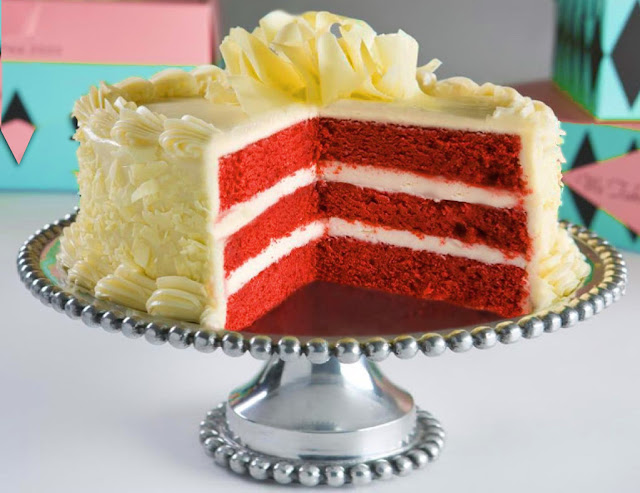 “One must ask children and birds how cherries and strawberries taste.” - Johann Wolfgang vonGoethe

Some time ago we visited a friend and she served us Red Velvet Cake. It was quite easily the best we had until that time. We had asked for the recipe, but as we were leaving we forgot about it. It was nice of her to remember and she sent us the recipe by mail. I was surprised to find what the secret ingredient of the cake was, which had made it quite zingy: Sour cherry syrup! This is a sweet and sour syrup made from Morello cherries. We often use this at home for a number of delicious dishes. The simplest thing is to drizzle it over vanilla ice cream, elevating the taste greatly. Here, in this recipe the syrup is spread over the cake, adding to the moistness and improving the flavour of the cake.


Method
Preheat oven to 170˚C. Grease and flour three 20cm cake tins.
In a large bowl cream the butter and the sugar. Add eggs one at a time, beating well after each addition.
Mix food colouring with cocoa and add to mixture.
Add flour alternately with buttermilk. Add the vanilla essence.
Mix the bicarbonate with the vinegar, and gently stir into mixture. Be careful not to over mix. Divide batter into three prepared 20cm round cake tins. Bake in preheated oven for 25 minutes. Test with a skewer to see if the cake is cooked. Allow to cool.
Melt the white chocolate in a double boiler and allow to cool to lukewarm. In a large bowl, beat the cream cheese until light and fluffy. Gradually beat in melted white chocolate and softened butter. Beat until it is the consistency of whipped cream.
Assemble the cake by placing the bottom layer on the serving dish and soaking the top with a couple of tablespoonfuls of sour cherry syrup. Put a layer of frosting on top of this and set the next layer of cake on top. Add syrup and frosting and repeat for the final layer, finishing off by frosting the whole of the cake.

Add your favourite recipe below using the Linky tool:
Posted by Intelliblog at 19:44