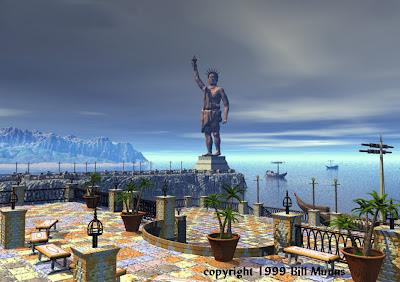 We woke up at the crack of dawn today as we went to bed early, trying to make up for some of the lost sleep of the last couple of days. We had decided to rent a car for three days but as it was still quite early we walked all around the area close to our hotel. About 100 metres down from the hotel is Mandraki Harbour, which was the main port of Rhodes for almost 2,500 years. The entrance to this small harbour (berthing about 130 boats) is flanked by breakwaters on which stand two columns on top of which are the statues of two deer, the Rhodian symbol of strength and wealth. Mandraki Harbor still remains very active, with lots of sailboats, private yachts and small cruise boats that offer trips around Rhodes and other nearby islands.

It is believed that the famous Colossus of Rhodes, one of the seven wonders of the ancient world stood near Mandraki Harbour. The Colossus of Rhodes is familiar to almost everyone and its history begins with the siege of Demetrios Poliorketes, successor of Alexander the Great, in 305 BC. When Demetrios was defeated, he abandoned all his siege machinery on Rhodes. The Rhodians decided to express their pride by building a triumphal statue of their favourite god, Helios-Apollo, the sungod. The task was assigned to the sculptor Chares of Lindos, a pupil of Lysippos himself, and twelve years (from 304 to 292 BC) were needed to complete it.

From its building to its destruction lies a time span of merely 56 years. Yet the Colossus earned a place in the famous list of Wonders. "But even lying on the ground, it is a marvel", said Pliny the Elder. The Colossus of Rhodes was not only a gigantic statue. It was a symbol of unity of the people who inhabited Rhodes.

To build the statue, the workers cast the outer bronze skin parts. The base was made of white marble, and the feet and ankle of the statue were first fixed. The structure was gradually erected as the bronze form was fortified with an iron and stone framework. To reach the higher parts, an earth ramp was built around the statue and was later removed. When the Colossus was finished, it stood about 33 metres (110 ft) high.

A strong earthquake hit Rhodes at around 226 BC. The city was badly damaged, and the Colossus was broken at its weakest point, the knee, making it collapse. Even when it fell it was a marvellous sight to behold, "few people can make their arms meet round the thumb", wrote Pliny in wonderment. The Rhodians received an immediate offer from Ptolemy III Euergetes of Egypt to cover all restoration costs for the toppled monument. However, an oracle was consulted and forbade the re-erection. Ptolemy's offer was declined. For almost a millennium, the statue lay broken in ruins. In AD 654, the Arabs invaded Rhodes. They disassembled the remains of the broken Colossus and sold them to a Jew from Syria. It is said that the fragments had to be transported to Syria on the backs of 900 camels.

It is a misconception that the Colossus straddled the entrance of Mandraki Harbour (where the deer columns are now). Given the height of the statue and the width of the harbour mouth, this picture is more impossible than improbable. Moreover, the fallen Colossus would have blocked the harbour entrance. Recent studies suggest that it was erected either on the eastern promontory of the Mandraki Harbour, or even further inland. In any case, it never straddled the harbour entrance.

Although we do not know the true shape and appearance of the Colossus, modern reconstructions with the statue standing upright are more accurate than older drawings. Although it disappeared from existence, the ancient World Wonder inspired modern artists such as French sculptor, Auguste Bartholdi, best known by his famous work, the 'Statue of Liberty' in New York. Even today, the Colossus is regarded as a masterpiece of art and engineering, although no trace of it remains.
Posted by Intelliblog at 03:58