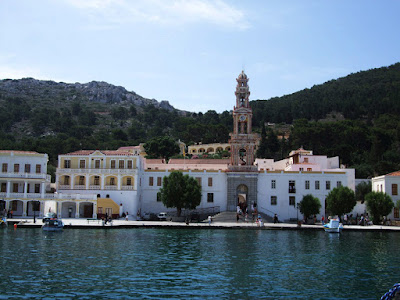 We first visited Panormitis monastery. This is a grand monastery built around the church of the Archangel Michael Panormitis (St-Michael-On-the-Bay). It contains many cells in which some monks stay, but also hosts many visitors largely Greeks and Cypriots who come here on a pilgrimage to adore the miraculous icon of the saint and who have a religious obligation to fulfill. Around the monastery are a few tourist shops and taverns and there are always a few fishing boats around that sell their freshly caught fish and shellfish.

We went into the church where a stream of pilgrims and tourists filed by the icon of the Saint and we lit a candle in a neighbouring chapel. Most Greek churches now forbid lighting of candles within them as the smoke damages the icons and frescos that decorate the interior. We were given phials of blessed oil for anointing and a small icon of the Saint. A shop on the monastery grounds sells icons and religious goods.

There are two very interesting museums associated with the monastery. A religious one containing a wealth of old manuscripts, old printed gospels and hymnals, priestly vestments, religious vessels and jewellery. The other is a folk museum with many implements and every-day objects of times of yore, arranged in a way more or less replicating how they would be found in a house of the era. All in all a very good place to visit with much to see.

We got back into the boat and thirty minutes later we were approaching Symi Harbour. The view was simply stunning. The town is built around a bay where the steep hillsides form an amphitheatre-like hollow on which the houses are precariously balanced. Needless to say there are sharply rising steps that connect these terraces on the multiple levels of the town. As soon as we got out of the boat, we walked along the esplanade and took in the general ambience of the place. A very typical cosmopolitan feel about the place with numerous tourists from all parts of the world walking around.

We immediately started climbing up the steps that led upward and soon we left the tourists behind and went to the upper part of town, towards Horio. The houses are traditional and generally well preserved with quite a few grand mansions here and there that have been renovated. We walked up towards the castle and the Museum of Symi. The steps seemed endless as we climbed ever upwards and the heat of the day increased. This is not for the faint-hearted or those with health problems or disabilities!

We finally reached the museum, which is housed in a traditional Symian mansion that originally belonged to the Gianneski family. The neoclassical elements of the mansion were added back in 1875. The house is a donation to the Greek state by Ariadni V. Farmakidi and Sevasti N. Farmakidi. A representation of the inside of a Symian house with the dining and the sitting room (furniture, settings, paintings and photographs of that period), along with some traditional local costumes, comprise the exhibition of the folk museum. The Museum also includes the following collections: Archaelogical gleanings dating back to classical, Hellenistic and Roman periods and a Byzantine collection including some excellent icons.

Coming out of the museum we decided to go down into the harbour via another road and we got rather lost. We ended up on the road tat is used by cars and which bypasses the older part of Horio. We walked down the road in the heat and followed the signs for Yalos, passing by the road that led to Pedi. It was rather a long haul, but finally we came back to Horio and climbed down the steps that led to Yalos. We walked around and saw some more of the town and then stopped and had a refreshing drink in one of the cafés. Before not too long, the time came for our departure and 50 minutes later we were back in Rhodes.
Posted by Intelliblog at 02:17