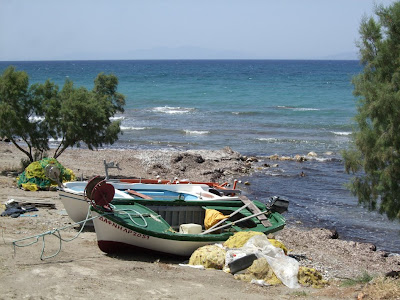 It was now a very hot afternoon and we felt quite uncomfortable in the sun among the ancient stones. It was a relief to get into the car, which fortunately was air-conditioned and to drive down towards the sea. We made our way to Skala Kamirou, a small fishing community at the base of the hill where ancient Kamiros lies in ruins. Cut into the rock of the shore is an impressive Lycian tomb. In shallow relief is a representation of a temple with its gable and presumably in the rock is a hollow chamber containing the remains. This site is not well-looked after at all and one cannot visit the tomb itself. Instead there are several tavernas and restaurants where one may have a bite to eat and a cold beer, some wine or ouzo. We decided to start making our way back to Rhodes and stop to have a lunch at a little taverna near the seashore at Kalavarda, which had been recommended to us by the tourist office.

At the taverna, only a few kilometres down the road, we sat at a table with a view towards the sea, which was only 25 metres away. The table was shaded by cool pergolas thickly covered with climbing vines and a fresh sea breeze kept the heat of the day at bay. We decided to have an ouzo with some “mezedhes” (snacks and tasty tidbits). The staff were friendly and the service quick, with some wonderful fresh country bread toasted with olive oil and herbs, fried potatoes, flavoursome salad, tomatoes and cucumbers, and fried fish. This was a meal fit for a king and we enjoyed it a lot.

We drove back to the city and came back via the new road, noting that along the way there are some more tourist attractions, including the Museum of Apiculture and of Natural History of the Bee. This is a new museum, founded in Rhodes by the Apiculture Association of the Dodecanese. It aims at informing its visitors and the public in general, about the nature, the products and the life of the bee. The Museum is unique and its establishment is owed to the concern of a group of people for the bee and the benefits it offers to humans. At the museum, one may learn some of the history of bee-keeping, the biology of the insect and how the bee uses nectar and pollen to make “royal jelly”, honey and wax.

Different kinds of honey are explained and the special features of the Greek and Rhodian honey are highlighted. In the museum the tools tools used in apiculture and in the production of honey are displayed. The architecture of the hives is on display and the visitor can see how the bee-keepers harvest the honey. The visitor can watch bees living and working within the hive, as the museum has hives of glass which permit the observation of the whole process. Finally, in the Museum shop one may buy all of the products of apiculture. There is honey, honeycomb, beeswax, royal-jelly, as well as cosmetics and other products based on honey and on wax.

Back in town we parked our car and visited the cathedral of the Annunciation of the Virgin Mary on the harbour front at Mandraki. The construction of the church commenced during the Italian occupation of the island and was completed in 1929. Its prototype was the Temple of Saint John the Baptist, patron of the Knights' Order of Rhodes located at the south of the Palace of the Great Magister (Castello), destroyed in 1856 when a lightning bolt caused a catastrophic explosion in the powder-kegs situated in the dungeons of the church.

Architecturally, the edifice is of the wooden-roof, tripartite basilica type. Initially It was Roman Catholic with big alabaster windows and was dedicated to St. John (San Giovanni). After the incorporation of Dodecanese to Greece in 1947, the temple was vested to the Greek government and was renovated and transformed into an Orthodox church. The pyramidal gothic-type apses were changed into Byzantine-type arches. The brick floor was replaced with marble flagstones. The Byzantine temple of the shrine was constructed and it was dedicated to the Annunciation of Virgin Mary.

From 1951 to 1961 during the office of archbishop Spyridon from Kefallonia, the impressive and rich hagiography of the temple was completed by the great painter Fotis Kontoglou, who designed the hagiography and supervised the decorative scheme, assisted by loannis Terzis and Pantelis Othampasis. Works of Kontoglou himself are the beautiful "Wider-than-the-Skies" depiction of the Virgin Mary of the shrine, the monumental depiction of the Annunciation with Mary on her luxurious throne and the beautiful Archangel Gabriel, the Hierarchs in the niche, the pictures of the templum and the first frescos of the arches. After Kontoglou's departure his assistants completed the hagiography.

The Annunciation church has three pictorial cornices, because of its great height. On the first, one sees the depiction of the story of Christ from His birth to His resurrection. On the second one, one can see the story of Mary through the houses of the Unseated Hymn and the letters of the alphabet; on the third cornice we see various saints. On the arches the prophets and various saints are depicted. The dividing marble screens of the Holy Shrine and the bishop's throne were created by the sculptors the brothers Skari from Peiraeus. This church is one of the most magnificent churches of Rhodes and as it is the Cathedral it hosts all of the formal religious ceremonies of the island.

We went back to the hotel in the evening and after freshening up and resting a little we had a pleasant evening playing birimba at cards.
Posted by Intelliblog at 06:12