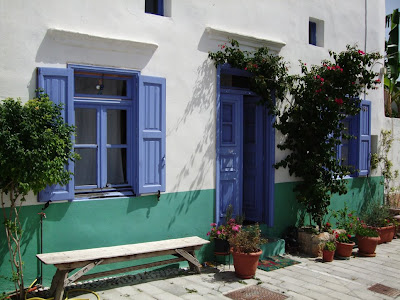 Saturday morning we slept in, so consequently, we didn’t get to breakfast until about 8:00 am. We had decided to have a leisurely day driving to a few spots we had missed the previous couple of days. We walked towards our car and outside the Town Hall we chanced upon a treasure hunt rally in preparation. About 100 people were assembled with their cars in readiness and numbered ready to gather their maps and directions in order to find the treasure at the end of the rally. They made a jolly crowd as they were breakfasting and we were told this was an annual event that attracted not only locals, but also some people from Athens and a couple of the nearby islands.

Our first stop today was to be the village of Koskinou, only about 7 kilometres south of the city. It is a big, traditional and picturesque village with some 2,500 permanent residents. The name of the village is perhaps due to the fact that the territory around it is full of mining holes (“koskino” in Greek is the sieve). Another suggestion for the name is that it comes from the ancient city of Koskinia, in Lydia, Asia Minor, since, according to tradition, the residents of the village come from there.

It is on a hillside with a wonderful view of the surrounding countryside. The village maintains several traditional features of the medieval settlement with many houses of neoclassical style, replete with traditional architectural features, coloured façades, and original interior decoration. The many colorful ceramic plates that are used to decorate expanses of walls inside the houses are a feature of Dodecanesian interior décor but in many houses these plates are enwalled in the masonry, not just hanging on the walls. Beautiful mosaic pavements, made of pebbles, with traditional motifs is another common feature of the village.

Even today the villagers are occupied in agriculture, stock breeding and the production of quicklime, a traditional activity that still goes on. During the Italian domination of the island, the male population of the village were famous as muleteers. In this period the village was well-off and it was considered as one of the richest villages of the island of Rhodes.

It is definitely worth strolling around the narrow streets of the village as we did to see the traditional houses. One may also visit the small churches of Aghios Loukas (St. Luke), an Early Christian basilica of the 4th century, and of Aghia Irini (St. Irene) of the 19th century. In the Folk Museum of the village, one may see collections of traditional tools, utensils and other objects of every day use of the days of yore. The museum is housed in a beautiful mansion with an imposing gate-like entrance. The village is also the seat of the Music Conservatorium, where the students continue the long musical tradition of the past.

Not far from the village, to the Southwest, one may see the ruins of an old, small castle. The first reference to this castle goes back to the 13th century, but it is fairly possible that it is much older, probably built in Byzantine times. It is in this castle that the residents of the area took refuge when the pirates used to attack the island.
Posted by Intelliblog at 06:15