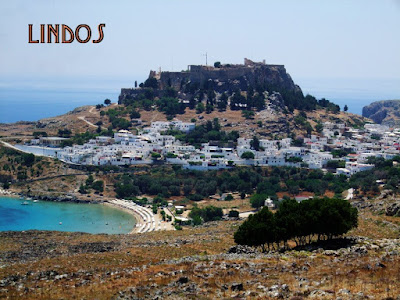 We drove on, our major destination for the day being Lindos. Lindos was one of the three major cities of Rhodes and is built on a rock, which rises to 116 metres from the sea. The rock stands almost bare, imposing and is surrounded on three sides by the sea, so that “Lindos may rejoice in the ocean”, in the words of a Hellenistic epigram. Lindos does not seem to have been particularly important in prehistoric times, although sporadic finds of the Neolithic period and the Bronze Age have been discovered on the acropolis.

According to legend, the foundation of the sanctuary of Athena Lindia goes back to the Mycenaean period, and Mycenaean finds have been yielded by cemeteries in the broader area of Lindos. The Archaic period (7th-6th centuries BC) was a golden age for Lindos, which played a leading role in the Greek colonisation movement, its most important foundation being Gela in Sicily. The 6th century BC was dominated by the figure of a moderate tyrant, Cleobulus who ruled Lindos for many years, and was included amongst the “seven sages” of the ancient world.

During his rule, the Archaic temple of Athena was built on the site of an earlier structure, and the acropolis received its first monumental form. The Persian advance and later the merger of the three old cities into the new city of Rhodos (408 BC) led to a diminution in the importance of Lindos as a political and economic power. It nevertheless continued to be an important centre, focused on the famous sanctuary of Athena, which received its final monumental form in the Hellenistic period and became the leading sanctuary on the island. The acropolis was used as a fortress in antiquity, as well as In Byzantine times, in the period of the Knights of St. John, and in that of Ottoman rule.

We enjoyed wandering through the winding streets of the village of Lindos that huddles the base of the rock and is archetypically Greek-island white. Part of its charm are the narrow streets and the lack of vehicular traffic. If one does not wish to walk up to the acropolis and castle, one may engage the services of a donkey and a driver and thus ride up the tortuous paths to the top. The usual tourist shops, restaurants and bars abound on the way up, but soon the path to the top becomes steep and gives way to stairs cut into the rock and strengthened with concrete here and there.

However, even today the ascent to the acropolis is still by the same steep road as in antiquity. After the first outer entrance to the medieval fortress, and before beginning to climb the large stairway that leads up to the Administrative Building of the Knights, we encounter two important monuments on our left a semicircular Hellenistic exedra, and, next to it, a depiction of the prow of an ancient ship carved in relief in the rock, which formed the base of a statue of Agesandros son of Milkion, the work of the sculptor Pythokritos in the early 2nd century BC. The fortification of Lindos by the Knights of Rhodes goes back to the 14th-15th century AD.

Passing through the ground-floor of the Knights Administrative Building, there is a large square, which occupies the lowest level of the acropolis and was full of votive offerings in ancient times. A row of vaulted structures, built in the first century BC, stood on either side of a stairway leading up to the level of the large Hellenistic stoa, built about 200 BC. A monumental stairway behind the stoa leads up to the highest level where are to be found the Propylaia and the temple of Athena, which formed the main sacred precinct.

The temple was completely isolated from the outside world by a wall with five entrances. In front of and behind it were stoas with rooms. The inner stoa flanked a courtyard in front of the temple, in which there was probably an altar. The temple, which measures about 22 x 8 m is a Doric, amphiprostyle tetrastyle structure. It was constructed in the 4th century BC or in the early Hellenistic period on the site of Cleobulus’ temple, which had burned down in 392 BC. It stands at the highest point of the rock and was the culmination of the stepped vista offered by the stoa and the Propylaia to anyone ascending to the acropolis.

From the highest point of the acropolis one can see the lower city, in which the most important monuments still visible are the theatre, the Tetrastoon and the Archokrateion at Kambana, a monumental tomb of an important Lindian family. The Byzantine church of the Panayia is also in the lower city. It was built in the 15th century and decorated with frescos in the 17th and 18th centuries. The traditional settlement of Lindos is in a very good state of preservation. A large number of archontika (mansions) survive, the most important of them from the 17th century, indicating that Lindos was a flourishing naval power in the early period of Turkish rule, as indeed throughout its entire history.

On the way back to our parked car (at a parking spot some distance away and with a magnificent view of the acropolis and village) we walked through the afternoon heat, our eyes dazzled by the whiteness of the walls. We went into a café that was one of several lining the parking area and we had a refreshingly cold beer. We talked pleasantly at length with the woman who owned it and we were once again pleased with the friendliness and hospitality of the locals. The woman gave us a tourist guide as we left and invited us to come to stay there next time we visited Rhodes.
Posted by Intelliblog at 04:15